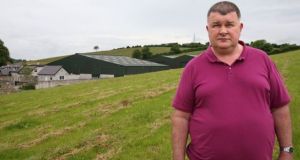 A Co Monaghan pub owner and farmer who had cattle shot dead in July by an Army marksman was fined by a judge at Carrickmacross District Court on Wednesday after facing three pollution charges.

The five animals were shot during a bankruptcy seizure.

John Hoey (49) of The Wayside Inn, Crann Nua, Carrickmacross, was prosecuted by the council for failing to comply with a licence issued for the discharge of treated effluent at his pub at Corcreeghagh, Dundalk, on September 7th, 2015. The prosecution was taken under section 4 of the Local Government Water Pollution Act 1977.

The pub owner and farmer was not present in court but pleaded guilty to the offences through his lawyer.

A witness for Louth County Council said that as a result of pollution being detected at the premises, Mr Hoey was issued with a discharge permit, which was subject to a number of conditions. However, further inspections revealed these conditions were not being complied with and no effort was made by him to keep the discharge within the levels permitted.

He was given four months to pay.