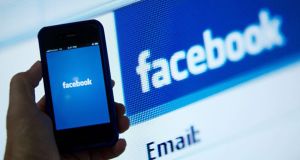 A Northern Ireland judge has ordered Facebook to disclose if any images of real or simulated suicides have been posted on its site. File photograph: Karen Bleier/AFP/Getty Images

Facebook has been been ordered by a Belfast High Court judge to disclose if any images of real or simulated suicides have been posted on its site.

Mr Justice Stephens also directed that the social media company provide information on pornographic material put up by its users.

The information is being sought as part of a lawsuit being taken against the company on behalf of a Northern Ireland schoolgirl, now under a care order, who set up accounts in order to contact men and post sexual photos.

Under the site’s policy, nobody under the age of 13 is allowed to be a user.

However, lawyers for the girl’s father claim an open registration system meant it was easy for her to establish profiles and potentially risk exposure to paedophiles and extreme content.

The court had heard previously that, from the age of 11, the girl created four different accounts to publish sexually suggestive and inappropriate photos.

It was alleged that she received text messages with extreme sexual content from men as a result of her personal details appearing on Facebook.

However, her accounts were deactivated as soon as reports were received by the company.

The girl’s barristers, Edward Fitzgerald QC and Peter Girvan, argue that Facebook should have done more to stop her setting up and operating accounts.

As part of continuing legal preparations, they sought an order compelling the company to provide more information on site content and what supervisory steps were taken.

Mr Justice Stephens said: “In relation to . . . both real and simulated suicide and pornographic images, I consider both of these should be answered.”

He also directed the company to supply details on what training it provides for moderators to deal with children under the age of 13 who gain access to the site.

All available information is to be provided before trial of the action, listed for hearing at the High Court in Belfast in September.