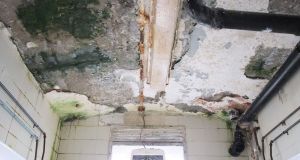 Prison conditions: A washroom in E Block of Portlaoise jail

Dissident republican prisoners in Portlaoise Prison are preparing to sue the State over what they believe are degrading and inhumane conditions in the jail.

The case is believed to be the first of its kind in the Republic, and follows months of unrest between the prisoners and prison management.

The facility is the only maximum security jail in the State, and houses several factions of republican prisoners as well as the most dangerous and volatile gangland prisoners.

The group taking the class action is aligned to Michael McKevitt and those who carried out the Omagh bombing. The members believe conditions in the E2 landing where they are locked up have deteriorated to such an extent that their human rights are being breached.

Photographs of the E2 landing and washroom obtained by The Irish Times appear to show the building in a state of very poor disrepair, including severe damp in washroom areas and cells.

Sources close to the prisoners claim some cells have been vacated and taken out of use because of extreme damp.

They have also blocked prison staff from entering the landing to clean it.

That stand-off had resulted in bags of refuse, including food waste, piling up from the beginning of summer until September.

At that point staff began entering the landing at regular intervals at night to clean when prisoners were locked in their cells.

Following talks between Irish Prison Service officials and prisoners’ representatives it was agreed last weekend to bring an end to the refuse protest on the basis that the officials would present a plan in the new year to address the prisoners’ concerns.

However, the prisoners have refused the prison service’s request to set aside their legal action against the State. They have enlisted the services of Louth-based legal firm Dermot Lavery & Co and have engaged Michael O’Higgins SC.

The prisoners invited Independent TDs Mick Wallace and Clare Daly to visit the prison and examine conditions there, which they did this month.

Neither replied to requests for comment from The Irish Times.

The prisoners’ case will seek to force the prison service’s hand to move the men permanently or carry out extensive works at the jail.

The prisoners have already refused a move to Castlerea Prison, Co Roscommon, because they believe such a transfer would “compromise their hard-won categorisation as political prisoners”, according to one source close to them.

As well as the damp and damaged walls and ceilings, the prisoners are also unhappy that they are still defecating and urinating into buckets in their cells overnight and slopping out in the mornings.

They say slopping out in their section of Portlaoise is continuing at a time when in-cell sanitation has been installed in other prisons, including Mountjoy.

They believe asbestos particles are being released because of crumbling walls, and say the quality of the food provided has deteriorated and portions reduced to such an extent that they need to source their own food from outside the jail.

The prisoners also claim washroom facilities are “horrendous”, there is sub-standard healthcare and only infrequent access to a doctor.

The prisoners have been complaining for years about conditions but the dispute has escalated of late because a number of prisoners from E2 landing have suffered a sharp decline in health.

Five of those on the landing have been diagnosed with different forms of cancer, although no link between their illnesses and the prison conditions has been established.

Ms Daly said conditions in Portlaoise were “Victorian and unacceptable”. She said prison staff performed professionally but the physical conditions – including a leaking roof – were “beyond belief”.