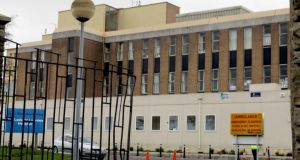 The husband of one of the women said she underwent an involuntary and unnecessary symphysiotomy when having the couple’s first child at Our Lady of Lourdes Hospital, Drogheda, in 1960. Photograph: David Sleator

A challenge to the constitutionality of the Government’s redress scheme for survivors of symphysiotomy has been brought on behalf of two elderly survivors of the controversial procedure.

It is claimed the women, both aged in their eighties, lack the necessary mental capacity to make applications for compensation under the Surgical Symphysiotomy Payment Scheme, approved by the Government on October 29th last and published on November 10th. It provides for payments of between €50,000 to €150,000.

One of the woman also alleges the scheme breaches her rights under Section 3 of the European Convention on Human Rights Act.

Mr Justice Donald Binchy granted leave yesterday to Ciarán Craven SC and Ruadhan MacAodháin BL, for the women, aged 81 and 85, to serve short notice of their separate High Court proceedings on the Government, Minister for Health and the Attorney General.

The Irish Human Rights and Equality Commission is a notice party to both sets of proceedings, which were returned to Friday.

The matter is urgent because the closing date for applications under the scheme is December 5th although that deadline may be extended, in exceptional cases, by 20 days, Mr Craven outlined.

In their actions, the women want orders restraining the defendants imposing any deadline for applications under the scheme until procedures are put in place which enable those women who lack decision making capacity to apply to the scheme.

Lawyers for the women had written to the Minister for Health and State defendants on November 12th last, two days after the scheme was published, saying their clients had impaired decision making capacity and could not apply under the scheme.

The letter asked that the deadline for applications under the scheme be stayed until procedures were put in place to allow applications be made on behalf of the women. The solicitors were later told their letters had been communicated to the assessor of the scheme.

The solicitors wrote again on November 20th, reiterating their concerns about the women’s position, but had not yet received a response, it was stated.

In an affidavit on behalf of the 81-year-old woman, her husband said she underwent an involuntary and unnecessary symphysiotomy when having the couple’s first child at Our Lady of Lourdes Hospital, Drogheda, in 1960 and, as a result, suffered lifelong personal injury, including incontinence, and physical and mental suffering, “affecting almost every element of her daily life”.

She only learned from media reports in 2010 she had undergone the procedure and issued proceedings in 2012, he said. However, she was no longer able to instruct solicitors to prosecute her case.

In that woman’s statement of claim, it is alleged at least 1,500 symphysiotomies, described as “18th century cruel and dangerous childbirth operations” were performed in Ireland from 1944 up to the 1980s and some 300 women survive today.

It is also claimed the Minister for Health had ruled out an inquiry into the practice and the United Nations Human Eights Committee had last July expressed concern the procedure was performed on some 1,500 girls and women in public and private hospitals here up to 1987 without their free and informed consent.

The UN Committee had, the claim noted, expressed concern the State has failed to set up an independent investigation into the practice; to identify and prosecute, where still possible, those responsible or to provide effective remedies to survivors.

The second woman underwent a symphysiotomy in 1961, also suffered lifelong injuries and has not the necessary capacity to apply under the scheme arising from having a stroke last year, the court was told.