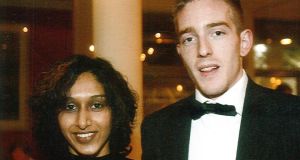 Dhara Kivlehan (left), who lived with her husband Michael (right) in Dromahair, Co Leitrim, died in the Royal Victoria hospital, Belfast, in September 2010, a week after giving birth at Sligo Regional Hospital.

An obstetric registrar at Sligo Regional Hospital found that Dhara Kivlehan was in acute renal failure on September 22nd, 2010, six days before her death, an inquest heard today.

Coroner Eamon MacGowan also heard the registrar, Dr Hind Al Hussain, asked a midwife at 1pm that day to record her anxiety that Ms Kivlehan be transferred to the intensive care unit (ICU).

Ms Kivlehan (29), who lived with her husband Michael in Dromahair, Co Leitrim, died in the Royal Victoria hospital, Belfast, in September 2010, a week after giving birth at the Sligo hospital.

Midwife Mairead Beirne, who was assigned to give one-to-one care to Ms Kivlehan on September 22nd, was asked about blood results which showed evidence of liver dysfunction and problems with clotting and sodium levels. She told the coroner’s court in Carrick-on-Shannon she was very concerned about urine output.

The jury of five men and two women heard that under HSE guidelines, if there are issues with two or more organs, a patient should be transferred to ICU .

Ms Beirne confirmed that Dr Hind, who is not due to give evidence, believed the mother was in acute renal failure. She also agreed other indicators for liver problems were “grossly elevated”.

In a statement to the inquest, the midwife recalled that at around noon that day, Michael Kivlehan had gone home to get some sleep and his mother Susan had stayed with Ms Kivlehan. The latter indicated she wanted to breastfeed her son Dior who had been born the previous morning, but she was unable to do so. “She was too drowsy to hold the baby.”

The midwife noted Ms Kivlehan’s abdomen was distended. She said Ms Kivlehan was in a two-bed room beside the nurses’ station in the maternity ward.

Asked about the difference between being in ICU and the maternity ward, she said the anaesthetists were based in the ICU. She added that anaesthetist Dr Seamus Crowley came to Ms Kivlehan’s room at 9.45am, 11am and at 3pm. “In fact he almost did not leave,” the midwife added.

At 1pm, Ms Kivlehan, who had had a caesarean section early the previous morning, asked for soup and ice cream and was able to take both. At this stage her blood pressure was 131/81 and she had a temperature of 36.6 degrees. Later, a physical examination found no bowel sounds.

Witness said she had made a retrospective note at 3.30pm, recording that she had discussed the decision to feed Ms Kivlehan earlier, and it was agreed that because there were bowel sounds at this stage it was OK to allow her food.

The coroner, Mr MacGowan, heard previously that Ms Kivlehan was transferred to the ICU between 3pm and 4pm that day.

Midwife Geraldine Melvin told the jury that when she relieved Ms Beirne that morning, Ms Kivlehan appeared very weak and complained of blurred vision. When the anaesthetist Dr Crowley attended at 11.15am, she said, “I expressed my concerns for the patient to Dr Crowley.”

She said Ms Kivlehan did manage to breastfeed when she was there but she had to be assisted. She helped Ms Kivlehan back into bed, put her lying flat and reassured her.

She told the inquest that from the time she saw Ms Kivlehan she was concerned and conveyed those concerns to doctors. She was “very frail, very fragile,” she said.

The inquest is continuing.

Lobby to press politicians over referendum on right to home 00:05
FG and FF back transition payment for those retired before qualifying for State pension 23:57
Irish Times poll: Large majority want change of government 23:33
Animal welfare group raises concern over live exports 22:25
Two men questioned about attack where man was set on fire 22:01