Woman gets another week to make case for bank not to seize €700,000 period home 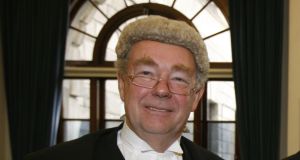 The president of the High Court, Mr Justice Nicholas Kearns, yesterday temporarily blocked the Dublin City Sheriff from evicting Mary White and her family from her house on Upper Rathmines Road, Dublin.

A woman, whose only income is from social welfare, has been given just over a week to convince a judge he should restrain a bank from seizing her €700,000 period home.

Ronan Munro, for Ms White, told Mr Justice Kearns during a brief application for extra time that there had been “some confusion” with regard to an appeal by his client against a Circuit Court order granting possession of the property to Bank of Ireland Mortgage Bank.

He said Ms White, who had been told by the sheriff that she would be evicted without notice if she had not vacated the premises by noon tomorrow, wished to lay full information before the court. Anne Lawlor, for the bank, said she had been in the Circuit Court when the possession order had been made and when leave to appeal had been refused. Ms White had not attended although it was believed at the time that she was “in the precincts of the court.”

Mr Justice Kearns said he would allow Ms White time to file a full affidavit laying out all necessary information as to why she believed he should further restrain the eviction. He would allow more time for the bank to file a replying affidavit.

Judge Margaret Heneghan in the Circuit Civil Court in August last year directed Ms White to give the three-storey property back to the bank.