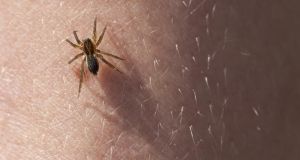 Several media reports said the death of John Francis Kennedy (48) of Avoncore Place in Midleton, Co Cork was as a result of a venomous spider, but pathologist Prof Nollaig Parfrey found that Mr Kennedy died of a ruptured oesophagus unrelated to a bite

A man whose death was reported to be linked to a toxic spider bite died from a ruptured oesophagus, an inquest has heard.

In several media reports following the death of John Francis Kennedy (48) of Avoncore Place in Midleton, Co Cork, his widow told how he became unwell and died as a result of a venomous spider bite.

Mr Kennedy, who died on July 18th last, was bitten by a poisonous spider in January 2013, his wife told Cork City Coroner’s Court.

Jeanne Kennedy said her husband had two holes in his neck as a result of a spider bite and the culprit was later found in a child’s schoolbag full of cobwebs.

“He had two marks on his neck and I have a photo of them. We found the spider two weeks later, it was in my daughter’s schoolbag,” Mrs Kennedy said.

“What else could cause two bite marks there? They were like two little holes.

“He felt it – a bite – and then he flicked it and he started bleeding then,” she said.

The father of five told his wife he’d been bitten by a spider, Mrs Kennedy said.

“It was a black spider with a weird red back. We found it in the schoolbag after and there were loads of cobwebs in the bag,” she said.

The inquest heard that Mr Kennedy was admitted to Mercy University Hospital, Cork in a critically unwell condition on July 18th. He had been bleeding since the previous day and was vomiting blood.

In his autopsy, Pathologist Prof Nollaig Parfrey found that Mr Kennedy died of a ruptured oesophagus, on a background of bleeding veins, secondary to alcohol cirrhosis.

Asked by Coroner Dr Myra Cullinane if the death was related to a spider bite, Prof Parfrey replied “No.”

Mrs Kennedy asked Prof Parfrey if he had investigated the spider bite.

“I took it into account but could find no evidence,” he replied.

In the weeks following Mr Kennedy’s death, reports of the alleged poisonous spider bite circulated through several news outlets. Speculation that the spider was a Redback, native to Australia, followed.

As part of the inquest process, consultant in infectious diseases Prof Mary Horgan was asked for her opinion. In a report she stated that symptoms relating to toxic spider bites usually surfaced within days, not months.

Upon his arrival at MUH, medics tried to save Mr Kennedy, who had a previous diagnosis of liver disease. Consultant Hepatobiliary Surgeon Chriostoir O’Sulleabhain said doctors were unable to identify the source of the blood loss due to the extent of the bleeding.

“The anatomy was completely distorted,” he said.

Doctors tried for two hours to save Mr Kennedy’s life but were unable to stabilise him and he died at 5.45am.

Extending her sympathies to the family, Dr Cullinane returned a verdict of misadventure.