Agent was contacted via darknet by a person looking for explosives, court told 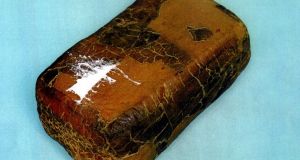 An internet user called Meat Cleaver was looking for Semtex to be delivered to Ireland, the Special Criminal Court heard on Wednesday. File photograph: PA

Gardaí arrested three men on suspicion of IRA membership after a tip-off from an undercover FBI agent, the Special Criminal Court has heard.

The undercover agent was contacted via the darknet by someone looking for Semtex explosives to be sent to Ireland.

Jonathan Hawthorn (45) of Ballintyre Downs in Ballinteer, James Geraghty (61) of Dolphin House in Dolphin’s Barn, and Donal O’Ceallaigh (33) with an address on Beach Road, Sandymount pleaded not guilty to membership of an unlawful organisation styling itself the Irish Republican Army, otherwise Oglaigh na hEireann, otherwise the IRA on September 14th, 2016.

Opening the trial for the prosecution on Wednesday, John Byrne BL told the non-jury three-judge court that in August 2016 an undercover member of the FBI was monitoring activity on the darknet, a part of the internet that allows users to browse anonymously without being spied on by law enforcement.

There are sites on the darknet, such as AlphaBay, that specialise in the sale of illegal material including explosives, counsel said. Through AlphaBay the FBI agent received a message from a user called Meat Cleaver who was looking for Semtex to be delivered to Ireland.

While the prosecution does not say that Meat Cleaver was an identity used by any of the accused men, Mr Byrne said the home of James Geraghty at Dolphin House was identified as the delivery address. The FBI agent alerted gardaí who created a “mock-up package” designed to mimic what had been ordered by Meat Cleaver.

At 11.05am on September 14th, 2016, an undercover garda dressed as a DHL driver delivered the package to Dolphin House where he met and spoke with Jonathan Hawthorn and Donal O’Ceallaigh. Mr Hawthorn signed for the package in the name of James Geraghty.

Gardaí, using a warrant, searched Mr Geraghty’s home and found the package on a couch in the sitting room. Mr Geraghty was arrested a short time later. Mr Byrne said the judges would hear evidence that the men failed to answer questions put to them by gardaí and a chief superintendent will give belief evidence regarding the accused mens’ involvement in the IRA on the date in question. The trial continues before Ms Justice Isobel Kennedy presiding with Judge Gerard Griffin and Judge Gerard Haughton.