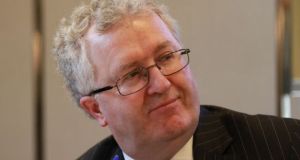 The Supreme Court has listed Mr Justice Séamus Woulfe to join some of his colleagues next month to deal, in chambers, with applications for leave to bring appeals to the court.

Such applications are heard by panels of three judges, sitting in chambers, and their decisions are later formally published as “determinations” on the courts website.

The latest updated Supreme Court diary lists Mr Justice Woulfe to hear such leave applications on February 4th, 12th and 19th next. He has not yet been listed to hear actual appeals.

The judge was appointed to the Supreme Court last July but had until now not been listed to carry out Supreme Court work since the controversy over his attendance last August 19th at the Oireachtas golf society dinner at an hotel in Clifden. Some 80 people attended the dinner.

Mr Justice Woulfe, a former Attorney General, said he was unaware of guidelines announced by the government the previous day, intended to reduce to six the numbers permitted at an indoor event. On August 21st, the Chief Justice, Mr Justice Frank Clarke contacted his colleague, expressing concern about damage to the judiciary and stating the public view was “being formed by reasonable people and not by a media frenzy”.

The resignations of EU Commissioner Phil Hogan and Minister for Agriculture Dara Calleary due to the public outcry over ‘Golfgate’ increased pressure on Mr Justice Woulfe who issued an apology but has consistently maintained there was no basis for his resignation.

Former Chief Justice Susan Denham was asked by the Supreme Court to review issues concerning his attendance. In her non-statutory review published on October 1st, her opinion was that Mr Justice Woulfe, for reasons of judicial propriety, should not have attended the dinner but that calls for his resignation would be unjust and disproportionate.

Matters might have rested there were it not for certain developments, particularly the October 2nd publication of a transcript of Denham’s interview with Mr Justice Woulfe, exposing what many regarded as a lack of insight and humility on his part.

The second was the judge’s reaction to what a Supreme Court delegation told him the same day what was expected of him under an ‘informal resolution’ process. Mr Justice Woulfe has said he was presented with “demands” which were “non-negotiable” and the tone and content of that meeting was “upsetting and traumatic”. The “demands” required him to accept a reprimand from the Chief Justice, not sit as a Supreme Court judge for three months and waive his salary for that period.

A meeting with the Chief Justice under the process was deferred three times at Mr Justice Woulfe’s request until the two finally met on November 5 th.

On November 9th, the Chief Justice published correspondence exchanged between himself and Woulfe between November 5th and 9th. It made clear the unanimous view of Mr Justice Woulfe’s Supreme Court colleagues was that he had caused “significant and irreparable” damage to the court and the relationship within it.

The Chief Justice said his personal opinion was that Mr Justice Woulfe should resign but the latter disagreed and had declined to resign.

The controversy passed into the political realm until the government decided on November 17th not to initiate a process to remove Mr Justice Woulfe from office, effectively returning the matter to the Supreme Court.

Because judicial conduct provisions of the Judicial Council Act have yet to be commenced, the court has no power to impose any sanction on Woulfe and its options are confined to the informal resolution process.

Mr Justice Woulfe, who has been seen around the Four Courts on several occasions, will now formally begin work as a Supreme Court judge on February 4th.

It remains unclear whether a previously proposed element of the informal process will be implemented – the judge’s acceptance of a reprimand by the Chief Justice.