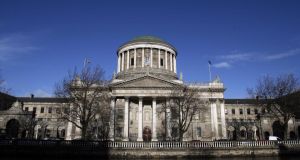 Niall Leonach and Noel Barry, chairman and secretary respectively of the Enniskerry Walkers Association, had claimed, since 1760, there was a public road in the disputed area known as the Old Coach Road. Photograph: Chris Maddaloni/Collins

The Supreme Court has refused to hear a further appeal in a long-running dispute concerning whether a public right of way exists over about 500 metres of land in the Glencree valley in Co Wicklow.

The Court of Appeal (CoA) ruled last year that two hillwalkers, Niall Leonach and Noel Barry, had failed to prove, as a matter of law, a public right of way existed over the area in question.

In those circumstances, it modified a declaration granted by the High Court against the two in favour of Enniskerry landowner, Joseph Walker.

The High Court declaration was to the effect that Mr Walker’s lands, and 48.5 acres of adjoining unregistered land at Annacrivey, Enniskerry, are not subject to any public rights of way.

The appeal court modified the declaration so as not to prevent the courts making any future decisions in any other proceedings regarding the disputed route.

Its declaration was to the effect the defendants are not entitled to enter upon Mr Walker’s lands at Annacrievy and the 48.5 acres of adjoining unregistered land for the purpose of purporting to exercise a public right of way over same.

The defendants sought a further appeal to the Supreme Court but, in a recently published determination, that court refused to hear another appeal.

The three judge Supreme Court said there was nothing to suggest the CoA dealt improperly with the case, a motion to allow further evidence or costs.

The CoA found the High Court correctly concluded there was no public right of way in a judgment which analysed the law as to public rights and as to mere usage, it said.

No aspect of that ruling has precedential value as a matter of law and the Supreme Court was “not convinced that a point of law of general public importance arises”.

Mr Leonach and Mr Barry, chairman and secretary respectively of the Enniskerry Walkers Association, had claimed, since 1760, there was a public road in the disputed area known as the Old Coach Road.

Following a dispute with the EWA and others over whether a public right of way existed, Mr Walker, from Glencree Road, Enniskerry, initiated proceedings in 2008 contending his lands at Annacrivey, acquired by his father in 1945, were not subject to public access.

He disputed claims by Mr Leonach, Monastery Grove, Enniskerry, and Mr Barry of Monastery, Enniskerry, there was a right of way about halfway between Enniskerry and Glencree and the route was marked as a road on maps of the areas for some 250 years.

In his High Court judgment of 2012, Mr Justice John MacMenamin found 12 maps dating from 1760 to 1975 adduced in evidence by Mr Leonach and Mr Barry were not consistent with their claim a right of way existed as alleged.

While a path may have existed at some time, it was most probably an estate track and not a public highway, he said. A structure known as Canavan’s Cottage also stood directly across the route of the alleged right of way, he noted.

The judge criticised the attitude demonstrated by both sides, saying neither had shown the degree of toleration necessary.

The CoA said, because the fundamental proofs were not provided to satisfy the evidential requirements for a claim the disputed way constituted a pathway, the High Court findings could not be set aside on appeal.

1 Coronavirus claims one more life while 11 new cases reported in Republic
2 Covid-19: Travel restrictions to stay and 'green list' put on hold amid fears of second wave
3 Bobby Storey: The IRA's planner and enforcer who stayed in the shadows
4 Gardaí seek help in finding missing Roscommon toddler
5 Rare whale dies after getting into distress in Wicklow Harbour
Real news has value SUBSCRIBE