Judgment in Kerins case puts onus for action on State 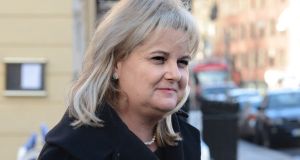 Former Rehab chief executive Angela Kerins. The Kerins case is not over and there could be further significant fallout if an application for damages is brought and succeeds. Photograph: Cyril Byrne

The Supreme Court, in its ruling over the treatment of former Rehab chief executive Angela Kerins by the Dáil’s Public Accounts Committee, has given the Oireachtas a simple message, in the eyes of David Kenny.

“If you end up back here, it’s your own fault,” said Kenny, an assistant professor of law at Trinity College Dublin. The judgments from the Supreme Court are of huge significance for two reasons.

Contrary to the long-accepted view that parliamentary freedom of speech renders what happens in the Oireachtas and its committees immune from judicial scrutiny, the Supreme Court decided there is no absolute barrier to bringing a case over the actions of a parliamentary committee.

However, its follow-on declaration of unlawful conduct by an Oireachtas committee as a whole, because its questioning of Ms Kerins went significantly beyond its terms of reference and beyond the scope of its invitation to her, is unprecedented.

Should advocates of freedom of parliamentary speech and the constitutional separation of powers be alarmed? The court itself has moved to assuage fears with the Chief Justice pointing out the Oireachtas itself can deal with the fallout and has already designed measures to do so. Those measures must satisfactorily address the issues that lead to Ms Kerins’s victory – control of terms of reference and invitations to witnesses, tighter conduct of hearings and a remedy for those aggrieved by improper conduct of committee processes.

Dr Tom Hickey, assistant professor of law at Dublin City University, said the court clearly considered that all parliament has to do to restore parliamentary immunity to where it was understood to be before the Kerins decision is to introduce a formal parliamentary mechanism through which witnesses before committees can formally contest actions taken by them. If that mechanism was in place, and even if it rejected the complaints about the committees, the message is the courts would not interfere.

That is “all very well in high-minded theory” but in practice things are likely to be different, Hickey said. The lines of the judgments may well be blunted by parliamentary advisers and committee chairs, leading to greater caution being exercised by committees than perhaps necessary, such as what happened when the FAI’s John Delaney came before the Committee on Transport, Tourism and Sport recently. He also fears “emboldened witnesses” might try to play on the “crack in the ice” from the Supreme Court judgments and blur the extent to which the court had tempered its findings.

Kenny shares the concern that the judgments, despite the court’s best intentions, could have a chilling effect on parliamentary speech and committees acting under legal advice may in the future, be excessively cautious and conservative.

While a lot can be done by the Oireachtas and its committees to avoid another Kerins situation and guard against further judicial oversight, ensuring absolute exclusion of court interference would require a referendum to give parliamentary committees a range of powers, Kenny noted. Given the experience in 2011, when the people refused to endorse such a proposal, there is no certainty any such referendum proposal would be approved.

The Kerins case is not over and there could be further significant fallout if an application for damages is brought and succeeds. As of now, the former Rehab chief executive has secured a Supreme Court declaration against the Dáil of unlawful conduct by an Oireachtas committee. Whether or not that entitles her to damages would involve a hearing raising novel legal issues not yet considered by the courts. This case has already made legal history. It could yet make more.