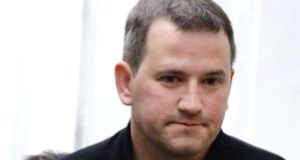 The Supreme Court, by a six to one majority, is to refer key issues in the State’s appeal over convicted murderer Graham Dwyer’s mobile phone data retention case to the EU Court of Justice.

The State’s appeal over a High Court ruling upholding Dwyer’s challenge to a 2011 data retention law has important implications for the investigation and prosecution of serious crime and may also impact on Dwyer’s separate appeal over his 2015 conviction for the murder of childcare worker Elaine O’Hara.

Although the State’s appeal will not now be fully decided by the Supreme Court until the CJEU rules, Chief Justice Frank Clarke, who gave the majority judgment on Monday, expressed important preliminary views with which five of his colleagues agreed.

Those included that a system of “universal but limited” retention of phone data is not in itself incompatible with EU law but that there must be a “particularly robust” access system in place which includes having independent prior permission for such access.

The current Irish access system does not meet that standard, the Chief Justice said.

Because the High Court finding that the 2011 Act breached EU law was made in 2018, that could mean, if the preliminary view stands, the data relevant to Dwyer may have been legally retained and accessed.

The Chief Justice stressed on Monday that the Supreme Court appeal did not concern Dwyer’s separate conviction appeal but rather concerned the High Court finding that provisions of the Telecommunications (Retention of Data) Act 2011 breach EU law because it allowed for indiscriminate data retention without adequate safeguards, including prior independent overview of access requests.

Each of the preliminary matters involved consideration of difficult issues of EU law, the Chief Justice said.

The Supreme Court is obliged, under the EU treaties and case law of the Court of Justice, to make a referral on any issue of EU law which is necessary to decide proceedings unless there is a “clear” answer to that issue of EU law.

He was not satisfied the answer to any of the three issues identified in this case was clear and the court would therefore make a reference to the CJEU.

The first issue is whether a system of universal retention of certain types of metadata for a fixed period of time is never permissible irrespective of how robust any regime for allowing access to such data may be.

The second seeks the criteria whereby an assessment can be made concerning whether any access regime to such data can be found to be sufficiently independent and robust.

The third issue is whether a national court, if it finds national data retention and access legislation is inconsistent with EU law, can decide the national law should not be regarded as having been invalid at all times but rather can determine invalidity to be prospective only.

A draft reference document was provided to lawyers for the sides and they have seven days to make observations on that before it is finalised.

Earlier in the main judgment, the Chief Justice said the use of phone data is increasingly crucial to the detection and prosecution of serious crimes, including murder, terrorism and cases involving the grooming of children.

The experience of the Irish courts is that some such cases have only been solved because of the availability of the type of phone metadata at issue in Dwyer’s case and Dwyer’s side had not disputed the importance of such evidence, he said.

If, as Dwyer argued, it is not permissible to have such “universal” retention of data, notwithstanding how robust any regime for access to that data is, then many serious crimes against women, children and other vulnerable persons will not be capable of detection or successful prosecution.

In that context, his view was that alternative forms of data retention, such as geographical targeting, would be ineffective in the prevention, investigation, detection and prosecution of at least certain types of serious crime and could also lead to potential violation of other individual rights.

In his dissenting judgment, Mr Justice Peter Charleton said this case was all about excluding “vital” metadata and Ireland is not part of any legislative obligation for the exclusion of evidence.

Issues of proportionality of a legislative measure impinging on guaranteed rights should be resolved by national courts and there was enough evidence before the Supreme Court for a ruling to be made as to whether the High Court decision should be reversed or upheld, he said.

It was also not appropriate to refer cases under article 267 of the Treaty of the Functioning of the EU which relate to criminal law and which should be resolved by application of a test on the protection of rights, he added.