Chief Justice says, with appeal pending, move could have had ‘serious’ consequences 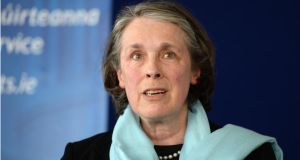 Chief Justice Susan Denham has delivered a rebuke to the Government after the amendment on same-sex marriage was signed into the Constitution ahead of the Supreme Court’s consideration of an appeal. Photograph: Dara Mac Dónaill/The Irish Times.

The Supreme Court has delivered a rebuke to the Government after the amendment on same-sex marriage was signed into the Constitution ahead of the Supreme Court’s consideration of an appeal.

In a judgment delivered on Wednesday, rejecting the right to appeal the results of the same-sex marriage referendum, Chief Justice Mrs Justice Susan Denham, with Mr Justice Adrian Hardiman and Mr Justice Donal O’Donnell, said the action might have had “very serious constitutional consequences”.

The Supreme Court also highlighted “the respect due to the legal process by other organs of State”.

The same-sex marriage referendum was passed in May of this year. An appeal to overturn the results of the referendum was rejected by the High Court in June, and on July 30th, the Court of Appeal also rejected the case.

Lay litigant Maurice J Lyons from Kilkenny, did not seek a stay, or delay to the implementation of that decision. Instead, he applied for leave to take the case to the Supreme Court on August 27th.

The Attorney General and other parties involved in the case were notified of this on August 28th.

Thursday’s judgment said the application by Mr Lyons for leave to appeal to the Supreme Court had been “overtaken by events”.

“While the Court has jurisdiction to consider the application, the situation is clearly moot because there is no longer a provisional certificate,” the three judges said.

They said if the lay litigant had been legally represented, his counsel would have applied for a stay at the conclusion of the judgment of the Court of Appeal.

“This highlights the necessity for practitioners and members of the public who seek leave to appeal to this Court to address the question of a stay in the Court below,” the judges said.

“Also relevant is the respect due to the legal process by other organs of State.”

The three judges acknowledged there were no adverse consequences in this case. “However, in another situation very serious constitutional consequences might have occurred had this Court considered it appropriate to grant leave on any grounds when the certificate had become final and the Constitution amended,” they said.