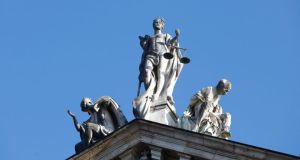 Although the Government maintains re-running the referendum is an ‘awesome’ task, it would be ‘less awesome’ than previous Government decisions to re-run the Lisbon and Nice Treaty referendums after a majority rejected both, Paul Sreenan SC has argued. Photograph: Michaela Rehle/Reuters

A seven judge Supreme Court has been urged to order a re-running of the Children’s Referendum on grounds of the court’s own finding that the Government’s information campaign in the referendum breached the Constitution.

Although the Government maintains re-running the referendum is an “awesome” task, it would be “less awesome” than previous Government decisions to re-run the Lisbon and Nice Treaty referendums after a majority rejected both, Paul Sreenan SC argued.

A fresh referendum must be held in light of the Supreme Court finding, made two days before the November 2012 referendum, that the Government “clearly and unequivocally” breached the constitutional process governing the conduct of referendums, he submitted.

“The Constitution requires an effective remedy for wrong.”

This was about upholding the constitutional rights of all of the electorate “to vote freely, to a fair and democratic process, to equality and to fair procedures”. The entire electorate, not just No voters, were affected by this unconstitutional conduct and this case was about “upholding popular democracy”.

It is “imperative”, when the process of direct decision making by the people is used, that is done in accordance with the Constitution and the law but the unconstitutional conduct in this referendum continued until two days before the people voted, counsel said.

Mr Sreenan, with Niamh Hyland SC, was opening the appeal by Joanna Jordan against the High Court’s rejection of her challenge to the constitutionality of laws governing the bringing of petitions disputing the results of referendums.

Ms Jordan’s case arises from the conduct by the Government of its information campaign for the Children’s Referendum. The referendum was passed by a majority of 58 to 42 per cent based on a 33.49 per cent turnout.

The key issue for the court to determine is what test should be applied when a petition challenging a referendum result is brought where there has been an established breach of the McKenna Principles, as determined by the Supreme Court, governing the conduct of referendum campaigns.

The High Court rejected her petition on grounds she failed to prove, on the civil standard of balance of probabilities, the Government’s information campaign materially affected the outcome. Last June the High Court also dismissed her claim the provisions of the 1994 Referendum Act requiring such a “material” effect be proven was unconstitutional.

She has appealed both decisions to a seven judge Supreme Court, presided over by Chief Justice, Ms Justice Susan Denham. The appeals are listed to last four days.

In her appeals, Ms Jordan relies on the Supreme Court finding that the Government spend of €1.1m public monies on a one-sided information campaign favouring the referendum amounted to a “clear disregard “of the limits imposed by the Constitution on what the State may do in a referendum. That finding, issued two days before the referendum, was made in a case brought by Dublin engineer Mark McCrystal.

Ms Jordan also relies on Supreme Court decisions in proceedings by former Green Party MEP Patricia McKenna to the effect the State is prohibited by the Constitution in spending public monies to advocate support for a particular side in a referendum. Those decisions established what is known as the McKenna Principles, to be adhered to in the conduct of referendum campaigns.

Today, Mr Sreenan said a core issue for the court to determine is the test to be applied when a petition challenging a referendum result is brought where there has been an established breach of the McKenna Principles. A second key issue was the application of that test to this case.

The requirement in the 1994 Act that a petitioner challenging a referendum result must show the established unlawful conduct had a “material” effect on the result is unconstitutional because it is impossible to prove, he argued.

The breach of the McKenna Principles in this referendum was clear and unequivocal and the Supreme Court judgments in the McCrsytal forensically examined the nature of what happened, he said.

While the State, in opposing the appeal, seemed to be arguing there should be no interference with the will of the electorate but the McKenna Principles were “there for everyone”. This was not a question of Ms Jordan’s rights but the rights of all members of the electorate to participate in a fair process conducted in accordance with law.

Those judgments were relevant to a consideration of what was the unconstitutional conduct, he said.