Supreme Court told motherhood must be based on genetics

Genetic parents of twins born to a surrogate should be recognised, court hears 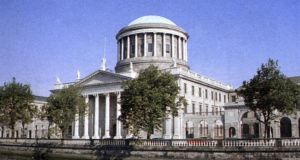 The law here since 1987 is that a declaration of parenthood can be issued on the basis of inheritable characteristics and the genetic parents of twins born to a surrogate should be recognised as their legal parents, Gerry Durcan SC said in the Supreme Court.

Motherhood can no longer be decided on the basis of giving birth but must be decided according to inheritable characteristics, the Supreme Court was told today.

The law here since 1987 is that a declaration of parenthood can be issued on the basis of inheritable characteristics and the genetic parents of twins born to a surrogate should be recognised as their legal parents, Gerry Durcan SC said.

The international trend is that the ultimate deciding factor for determining a child’s parentage is the presence or absence of genetic links, he added.

Until science made certain advances in the 1970s, the birth mother and gestational mother were always one and the same and the law took account of that biological fact, he said.  That situation no longer applied given the advances in assisted reproduction techniques and the effects of the law must also change.

If Irish legislators believed the changed effects of the law as a result of the scientific advances were not desirable, then they could have changed the law here as they did elsewhere but they did not, he added.

The position now is that both motherhood and fatherhood can be established on the basis of genetic testing as matters of absolute certainty, he said.

Mr Durcan was beginning his arguments opposing the State’s appeal against a High Court decision granting the genetic parents application to be registered as the twins’ parents on their birth certificates.

The twins were born some years ago to a sister of the genetic mother who agreed, in what was described as an act of love, to act as a surrogate for her sister.

Outlining his case today, Mr Durcan said the legal position here under legislation introduced in 1987, the Status of Children Act 1987,  is that an individual or couple may secure a declaration of parentage if they can establish inheritable links between them and a child. Inheritable or genetic links are the determining factor in considering whether such a declaration can be issued.

The genetic parents were entitled to a declaration of parentage of the twins as had been granted to them by the High Court, he argued.

His clients’ position had to be addressed on the law as it is and not  on the basis  that new laws are being prepared to deal with assisted reproduction issues, counsel added.   The appeal continues.