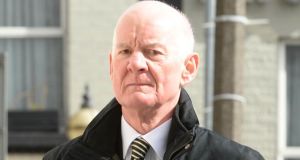 Patrick Neary, former head of the Irish Financial Services Regulatory Authority (Ifsra), told the court he believed Mr Quinn when he told him in January 2008 that he only had small holdings in the bank and in February when he said he had “gone long in financials” , that is converted his holding to shares.

Mr Neary said he did not know of the large number of contracts for difference (CFDs) positions - investment products based on share value - Mr Quinn held until March 21st.

Patrick Gageby SC, for William McAteer, highlighted a series of emails to other officials in Ifsra from the Quinn Group that outlined Mr Quinn’s €2 billion exposure through CFDs.

He said the emails showed while Mr Neary understood Mr Quinn’s CFDs were history, “on the next floor below” there were “a stream of emails that indicated the man had substantial CFDs”.

“Yes, that’s what it is suggesting,” Mr Neary responded.

Mr Gageby asked if his colleagues ever told him of the information they had.

Mr Neary said he had no recollection of them telling him. Asked if he had “any idea how the breakdown of communication was such” that he was “ignorant of this”, Mr Neary said he did not.

Mr Gageby suggested the alternative was that he did in fact know about the size of the CFD position.

“That is not correct,” Mr Neary responded.

Mr Gageby asked Mr Neary if he “practised the art of not being told difficult things”. Mr Neary responded that he did not know there was an art.

Asked if it was possible he forgot, he said he did not believe that was the case.

Mr Gageby also highlighted a meeting of the Domestic Standing Group, a high level committee involving Ifsra, the Central Bank and the Department of Finance set up to discuss and prepare for economic difficulties, on February 22nd.

He opened a note to the court which showed Mr Neary had attended and there had been references to CFDs. The note mentioned the ramifications in the market “if current positions become publicly known”. Mr Gageby asked what the “positions” referred to.

Mr Neary responded that he did not know.

Mr Neary said he could only state what he could recall.

The note said items for discussion at the meeting included “understandings of CFDs”, the court was told.

It also said “what is impact on share price from closure of CFD positions - closure may not itself xxxx [SIC]Anglo - could spook hedge funds”.

Having read the note, Mr Gageby asked Mr Neary if he was seriously saying he didn’t know about the CFD positions.

Mr Neary said he did not. Good Friday, March 21st was “the first time I heard of it”, he said.

Seán FitzPatrick (65) of Greystones, Co Wicklow; Mr McAteer (63) of Rathgar, Dublin; and Pat Whelan (51) of Malahide, Dublin, have been charged with 16 counts of providing unlawful financial assistance to 16 individuals in July 2008 to buy shares in the bank, contrary to section 60 of the Companies Act.

The Quinn CFDs were unwound in July 2008, with the Maple 10 businessmen buying 1 per cent each and the Quinn children buying the balance, both groups using loans from Anglo.

This afternoon, Mr Gageby also highlighted a schematic included in an internal report in Ifsra on March 4th. It outlined the flow of funds from Quinn Insurance to Bazelly Ltd, the company that held the CFDs. Mr Neary initially did not recall the document, but then confirmed he had been at the meeting when it was discussed.

He agreed that on that date, he still thought Mr Quinn’s CFDs were “all in the past”.

Mr Neary also told the court he could not recall making a phone call in early March to then chief executive of Anglo David Drumm to discuss how a road show in the Middle East to sell the CFDs had gone.

Mr Gageby said the road show occurred in the first week in March and Matt Moran, then chief financial officer at Anglo, had given evidence of the call.

Mr Neary said he had no recollection of it and was not aware the road show had happened. He believed the road shows took place at the end of March and in April, he said.