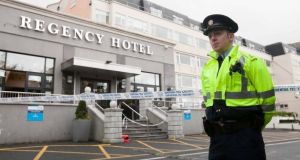 A file image of a garda outside the Regency Hotel in Dublin following the fatal shooting of David Byrne (34) in 2016. Photoraph: Collins

The Regency Hotel shooting trial has been further adjourned after the Special Criminal Court heard that material in the case had presented some “unprecedented conundrums”.

The trial had been due to resume on Monday but was instead adjourned until Thursday.

The case had previously been adjourned, almost two weeks ago, after the defence requested to be provided with copies of emails exchanged between four gardaí involved in the case.

Patrick Hutch (25) of Champions Avenue, Dublin 1, has pleaded not guilty to the murder of David Byrne (34) at the Regency Hotel in Dublin on February 5th 2016.

He also denies possessing three AK47 assault rifles in connection with the shooting.

Michael O’Higgins SC, for the accused, told the court on Monday the Director of Public Prosecutions had disclosed material that the defence will have to consider further and he was applying for the case to be put back.

He said the defence will then be applying that the trial be “adjourned outright”.

Mr O’Higgins said the defence will make submissions to the court that certain matters need to be investigated and that will take time.

He added that a postponement and resumption of the trial would not be practical. “This is a complicated matter,” the barrister said.

Mr Justice Tony Hunt, presiding, sitting with Judge Patricia Ryan and Judge Ann Ryan, said matters were proceeding in the background even though the trial was not and that the court was not going to enquire into matters proceeding outside the courtroom.

The trial was adjourned until Thursday.

The court has previously heard the shooting took place during a boxing weigh-in at the Regency Hotel, when a man dressed as a woman and another wearing a flat cap, armed with handguns, followed by three people dressed in tactical-style garda uniforms and carrying assault rifles, raided the venue.

It is the prosecution’s case Mr Hutch was the man dressed as a woman and that he did not shoot Mr Byrne but was part of a “shared intention” to commit the offence.