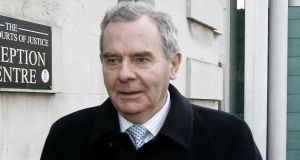 Members of Seán Quinn’s family sat in court for almost every day of the 10 weeks of the Anglo trial. Most of the time his sons-in-law, Niall McPartland or Stephen Kelly, who are both solicitors, were present.

His daughters Aoife Quinn (also a solicitor) and the former billionaire’s youngest daughter Brenda Quinn turned up on occasion to take notes.

The family continues to believe that lending of some €2 billion to them by the former Anglo Irish Bank from the end of 2007 until the summer of 2008 was entirely illegal.

Last night the Quinn family said in a statement: “We have been following the recent trial very closely and feel that it would be inappropriate to comment on this case, which specifically related to three individuals. The information that we have garnered will be of huge assistance to us in our forthcoming legal cases against IBRC (in special liquidation), Kieran Wallace, the Department of Finance, the Financial Regulator and the board of directors of Anglo Irish Bank.”

The family added: “As we are now in our fourth year since the invalid appointment of a share receiver to our companies and the criminal trial has now concluded, we will now be looking for a hearing date as soon as possible.”

The family declined to comment further. Theirs is a civil case and will be heard in front of a judge rather than a jury.