Quinn says he felt like a ‘fool’ after he lost €3.2 billion investing in Anglo 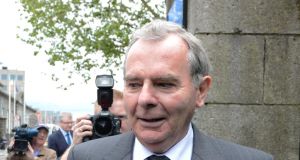 Seán Quinn: he described his dealings in Anglo’s shares and contracts for difference as a “fiasco” and said he had taken “a right beating” as a result. He said the experience had left him “furious”. Photograph: Cyril Byrne

Businessman Seán Quinn has said he felt like “a fool” after he lost €3.2 billion investing in Anglo Irish Bank.

Mr Quinn described his dealings in the bank’s shares and contracts for difference as a “fiasco” and said he had taken “a right beating” as a result. He said the experience had left him “furious”.

Under cross-examination from Brendan Grehan SC, who is representing Anglo’s former managing director of lending Pat Whelan, Mr Quinn told the court he believed the shares he held in Anglo were his security for loans received.

He told the court he was 100 per cent sure that former Anglo Irish Bank chief executive David Drumm had told him this, but he acknowledged there was no paperwork to back his assertion up.

“I’d like to think there is information in the Anglo offices to verify that,” he said, when questioned about the absence of such documentation.

Mr Quinn said he had built up his holding in Anglo without encouragement and had given a commitment to Mr Drumm that he would pay back his borrowings. He said he was under the impression the bank was doing well as profits and dividends were rising.

‘Secret’ stake
Mr Grehan earlier put it to Mr Quinn that he had used nine different contracts for difference providers to build up his holding, which he said one could assume was with a view to building a “secret” stake. Mr Quinn agreed.

The court was told of a letter dated March 18th, 2008, sent from then Quinn Group chief executive Liam McCaffrey to Michael O’Sullivan of Anglo Irish Bank. It contained an agreement to use Mr Quinn’s children’s shares in the group as collateral for a €220 million loan.

Asked if he was aware of the commitment, Mr Quinn queried if this was “where I gave away the family silver”.

Mr Quinn said he at no stage believed the shares would be taken as security but that if Mr McCaffrey had told the court he had been informed about the commitment, then he had been.

Mr Quinn explained that he had not been involved in the administration of the Quinn Group for more than 30 years. He said he had left school when he was 15 and that he was involved in “spending money stupidly” and trying to ensure the group turned a profit.

Mr Grehan said lending to the Quinn Group had continued and that a breaking point came early in July 2008, when he said Anglo Irish Bank had reached the limit of what it was willing to provide.

“They were running out of rope,” Mr Quinn said.

Mr Grehan said Mr Quinn needed some €200 million to appease bondholders and that the funds had been declined until a condition was agreed that he handed over power of attorney regarding his Anglo contracts for difference.

He said he had a conversation with Mr Drumm, which he described as not being overly friendly, and that language was used that he would not care to repeat.

Mr Quinn said he was not happy he had to unwind his shareholding in the bank at that point. He said he had invested billions in the bank on an understanding that his shares were his security and that he did not think it made any sense to sell them off while the bank’s share price was so low.

‘Furious’
“I was furious and I am still furious,” he said. “We lost €3.2 billion through the Anglo fiasco. I was a fool.”

Mr Grehan said he did not want to see Mr Quinn beat himself up over the experience.

“I’ve got a right beating over the last few years,” Mr Quinn replied.

Mr Grehan later referred to a letter of December 17th, 2007, regarding a €500 million loan facility to the Quinn Group. The letter detailed provisions regarding the securities attached to the loans which included properties such as hotels, a tower block and a shopping mall in eastern Europe.

Mr Quinn said some of the properties included in the agreement were valued at 400 per cent of their worth.

Mr Grehan said it appeared the bank was going to extraordinary lengths to arrange the securities but Mr Quinn said he believed the bank wanted to cover up the contracts for difference position and that there had been internal conversations about a default risk.

Mr Grehan said there was no evidence of such an assertion being made and that Mr Quinn was making points to support a litigation he was involved in “down the quays”.

“If they hadn’t given you the money in December?” asked Mr Grehan.

Mr Grehan told the court that Mr Quinn sought a meeting with the board of Anglo Irish Bank.

Mr Quinn said this was because he liked to be hands-on and to look people in the eye to find out what was going on.

He said he was being told that the bank was becoming more profitable and that dividends were rising but at the same time the bank’s share price was falling and his family was being given money to buy shares.

Asked if he wanted to meet the board to plead his case, Mr Quinn said he wanted to establish if the future for Anglo Irish Bank was “as glossy” as he had been led to believe.

John Fitzgerald, for former Anglo chairman Seán FitzPatrick, told the court that Mr Quinn and his client met on three occasions – once in September 2007 and twice in March 2008.

The first meeting he said was a “fact-finding mission”, which he said came on the back of some speculation in the press about Mr Quinn’s holding in the bank, and that they were told he had a 24 per cent stake.

‘Surprised’
Mr Quinn said he was not sure if the two were shocked, and it was more a case of them being “surprised”.

He replied that he did.

Mr Fitzgerald said the concern was such that a meeting with the financial regulator was organised shortly afterwards.

Mr Quinn said that was correct but that no plan had been made as to how to proceed at that point.

Mr Fitzgerald said the bank wanted Mr Quinn to reduce his holding to single digits when the share price improved.

Mr Quinn agreed that this was the case. However, the share price continued to fall further.

Mr Fitzgerald put it to Mr Quinn that he knew something about Anglo Irish Bank that investment brokers did not – his holding in the bank.

“I wish I had known more,” Mr Quinn said, adding that the bank’s share price was in “freefall” but the profits were rising.