Gardaí had set up listening devices at Dublin house 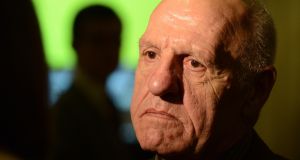 It was the first time Kevin Hannaway, one of the so-called “hooded men”, was back in custody since 1971 when he was subjected to what the European Court of Human Rights (ECHR) called “inhumane and degrading” treatment. Photograph: Cyril Byrne / THE IRISH TIMES

A number of people involved in conducting an IRA “inquiry” of suspected informants in a Dublin suburb have lost appeals against the severity of their prison sentences.

The group was convicted of helping the IRA carry out interrogations of other members following a series of operations that were foiled by gardaí. The IRA’s Dublin and Belfast brigades wanted to know who was responsible for leaking information and a number of men were brought to a house in Castleknock in Dublin for their interrogation.

The gardaí, however, had set up listening devices at the house and used recordings of the interrogations to arrest and convict four men and one woman for their participation. They were all found guilty following a trial at the Special Criminal Court in Dublin, in June 2018.

Kevin Hannaway (71) of Colinmill, in Belfast as well as Eva Shannon (61) of Oakman Street, in Belfast were given three years and nine months and four years imprisonment respectively for assisting the interviewing of persons involved in IRA-organised criminal activities at Riverwood Park, Castleknock, Dublin 15 on August 7th and 8th, 2015.

It was the first time Kevin Hannaway, one of the so-called “hooded men”, was back in custody since 1971 when he was subjected to what the European Court of Human Rights (ECHR) called “inhumane and degrading” treatment. Hannaway had been interned and taken to a secret base in Derry during the Troubles where he had a hood placed over his head while being subjected to white noise and sleep deprivation. The ECHR stopped short of calling it torture.

During the trial, Hannaway asked to be allowed to leave the courtroom while the recordings from the house in Castleknock were played, as the white noise brought him back to the period of detention in 1971.

Seán Hannaway (48) of Linden Gardens, Belfast, was given five years and six months, David Nooney (53) of Coultry Green, Ballymun, Dublin was given three years and nine months while Edward O’Brien (42), of Hazelcroft Road, Finglas, Dublin was given 16 months imprisonment all for membership of an unlawful organisation, namely an organisation styling itself the Irish Republican Army, otherwise Oglaigh na hÉireann, otherwise the IRA on August 8th, 2015.

The Court of Appeal upheld all five of their sentences on Friday despite appeals by Kevin Hannaway, Seán Hannaway and Eva Shannon that their sentences were too severe, as well as appeals by the Director of Public Prosecutions that the sentences imposed on Nooney and O’Brien were “unduly lenient”.

Giving judgment, Mr Justice John Edwards said Kevin Hannaway’s position was “most complex”. He said the 72-year-old had an unfortunate history of being “subjected to torture” in northern Ireland many years ago and suffered from PTSD.

Mr Justice Edwards said a medical report prepared by a consultant forensic psychiatrist found Kevin Hannaway to be “not fit for imprisonment” on the E Wing of Portlaoise Prison, where there was a constant undercurrent of noise, including white noise from an air conditioning system, which triggered nightmares associated with his arrest in 1971.

The report, prepared by Professor Harry Kennedy, described the conditions faced by Kevin Hannaway as “life threatening” which required further investigation by the prison authorities.

Counsel for Kevin Hannaway, Conan Fegan BL, submitted that his client’s circumstances were so unusual and “exceptional”, that he urged the court to suspend the balance of his sentence.

However, the court could find no error in principle. Mr Justice Edwards said the sentence imposed reflected the gravity of the offence and the management of Kevin Hannaway’s prison sentence was a matter for the prison authorities.

He said each accused participated in conducting an IRA inquiry which involved a “high level” of planning and organisation. It was not just passive assistance or support but “active engagement” in the furtherance of an illegal organisation’s activities.

A contention that the Special Criminal Court “tarred” Kevin Hannaway, Seán Hannaway and Eva Shannon “all with the same brush” did “not stand up to scrutiny”, according to the judge.

President of the Court of Appeal Mr Justice George Birmingham, who sat with Mr Justice Edwards and Mr Justice Patrick McCarthy, said the DPP’s undue leniency reviews were refused, as were the three appeals against sentence.