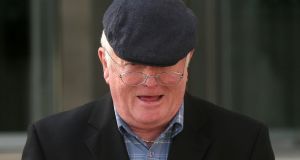 A man who put an incendiary device on a Dublin-bound passenger bus and made bomb threats during the State visit of Queen Elizabeth five years ago has been jailed for 8½ years.

Billings was further convicted of four offences under the Criminal Law Act of 1976 of knowingly making false reports tending to show that an offence had been committed. The sentences are to run concurrently .

He was found guilty of making a false report within the State on May 16th, 2011, that bombs had been placed at Busáras in Dublin and at Sinn Féin’s headquarters.

On May 16th, 2011, a caller to Longford Garda station said there was a bomb on a Dublin-bound Corduff Travel passenger bus, a second bomb on a bus at Busáras, and a third bomb at Sinn Féin headquarters in Dublin.

The Corduff Travel bus was stopped at Maynooth, and searched by gardaí, who found a suspicious object, comprised of gunpowder and a two-litre bottle of petrol, in the luggage compartment.

This was an “outrageous, highly irresponsible and dangerous act” which “recklessly exposed passengers, staff and members of the emergency services to very significant risk of serious injury or death”.

He said the bomb was intended to give credence to further hoax calls Billings planned to make. Gardaí also searched Sinn Feín offices and another bus. Nothing was found.

The judge said mitigating factors were his contribution to the smooth running of the trial and his age.