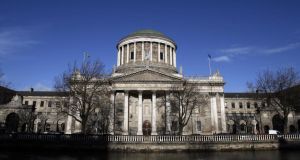 The High Court has rejected a man’s claims of squatters’ rights to a ruined 13th century castle in Co Galway. Photograph: Chris Maddaloni/Collins.

The High Court has rejected a man’s claims of squatters’ rights to a ruined 13th century castle in Co Galway.

Philip Jones, who lives in a stately home beside the ruins of Castle Hacket at Belclare, Tuam, had sought to overturn a Circuit Court finding that the old castle and its three-quarter acre site belongs to Culburne Ltd, a company of Ms Mairead Ní Nionain.

Ms Justice Iseult O’Malley found Culburne had proved it was sufficiently in possession throughout the 15 year period during which Mr Jones claimed he was in occupation.

Mr Jones had failed to prove he enjoyed continuous and consistent possession for at least 12 years to give him a legal entitlement to adverse possession, or squatters’ rights, she ruled.

The judge awarded the costs of the High and Circuit Court hearings against Mr Jones, representing himself, who said the costs order would “ruin me and put me out of business”.

Mr Jones said he was the agent for a Jersey-registered company, Cavaliera Ltd, which bought the house from Ms Ní Nionain’s company in 1993 and he lived there since as a tenant of Cavaliera.

He accepted the castle and the piece of land were not included in that sale but argued Ms Ní Nionain’s company was not active for several years and was not restored to the companies register until 2009 when the property was put up for sale.

It was only then his occupancy was challenged, he said.  He had grazed livestock on the land and also rented it out to film companies as a backdrop.  It was also a visual amenity for him from his house.

In June 2012, Galway Circuit Court granted a declaration stating Mr Jones has no right, title or interest in the property and granted injunctions restraining him from trespass. He appealed to the High Court.

Dismissing his appeal, Ms Justice O’Malley said Mr Jones had almost from day one decided to seek adverse possession over the old castle.  Previous cases established the slightest of acts by the owners was sufficient to prove they had not been dispossessed, she said.

In this case, those acts included Ms Ni Nionain, who lived in the UK since 1995, visited the property three times a year, instructed agents to look after it for her and instructed an auctioneer to put it up for sale in 2004 and 2009.

One of her agents told the court Mr Jones put up “no trespassing” signs and later “danger” signs when a crack developed in the wall of the castle. He also put padlocks on the gate but had to change them when they were removed by someone who also put on their own locks.

While Mr Jones may have grazed animals from time to time, it was not of sufficient regularity to be noticed by anybody, the judge also said.

The fact Culburnie was not active for a number of years did not mean it could not have given instructions on looking after the property, she said.   A court order in 2009 restoring the company to the companies register meant the company was effectively never struck off, she said.

David Newman Johnson, retired inspector of national monuments with the OPW, said the castle is in a very bad state of repair and had not been attended to for years.

1 UK to close borders to non-English speakers and unskilled workers
2 Sinn Féin seeks to draw line under TD’s ‘unacceptable’ tweets
3 Draining the swamp? Trump in spree of clemency for rich white men
4 A Russian cruiser with ‘cannibal rats’: What other ‘ghost ships’ could be out there?
5 New Sinn Féin TD apologises for ‘glib, off-the-cuff tweets’
Real news has value SUBSCRIBE