Man jailed for tying boy (14) to radiator and torturing him 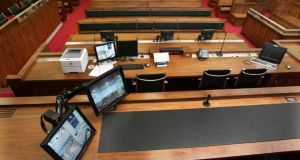 A man has been jailed for six years after he tied a 14-year-old boy to a radiator, threw boiling water down his trousers and removed skin from his knees, knuckles and fingertips with a cheese grater.

Ellis, of Rathmines Road Lower, Rathmines, brought the boy into a flat and said he wanted to show him how to tie a particular knot. He then used a hoover flex to tie the victim to the radiator before he tortured him for almost hour and a half.

Ellis has since been diagnosed as a paranoid schizophrenic.

Judge Desmond Hogan sentenced him to a total of nine years in prison with three suspended for this and other offences, including assault causing harm and burglary.

After reading probation, medical and psychiatric reports, Judge Hogan noted that Ellis has a very high risk of re-offending.

He said Ellis has “a propensity to do very violent things,” and that he seems to be getting worse.

However he commented that it is Ellis’s drug-taking that leads him to commit crime, not his mental problems.

Garda Eddie Fallon told Cormac Quinn BL, prosecuting that Ellis was convinced the teenager had found a stash of drugs.

Ellis started to shout at him that he owed him “€3,000 for pills”, even though Gda Fallon said there was no evidence that the teenager had found any drugs or that he owed any money.

The teenager managed to escape after he told Ellis his father had some money and if he released him he would go to his house, get the cash and return.

The teenager didn’t return and the gardaÃ­ were alerted but before officers arrived at the flat Ellis was attacked at his home and taken to James’s Hospital. He was arrested after he was discharged.

Gda Fallon told Mr Quinn that gardaí ­ asked Ellis if he wanted to make a complaint in relation to the assault on him but he refused. He said no allegation has ever been made and gardaí ­ don’t know who carried out the attack.

A victim impact report before the court said the now 16-year-old boy had burns to his genitals and inner thighs. It was initially believed he would need skin grafts but the skin has since healed. He continues to receive treatment.

His mother outlined in the statement that the assault has changed her son’s life and he has since left school.

Ellis was also sentenced for two charges of burglary of his neighbour’s homes and stealing a Porsche at Knocklyon on October 6th, 2011. He pleaded guilty to these offences.

He has 26 previous convictions for road traffic offences, burglary, criminal damage and theft.

Dr Tom Moran told Tom Neville BL, defending, he first treated Ellis when he was referred to him as 13-year-old because he exhibited symptoms of Tourette’s syndrome.

He told Judge Hogan that Ellis suffered at the time with both motor and vocal ticks.

Dr Moran said Ellis later displayed symptoms of paranoid thinking, elated mood and racing thoughts. He said he knew Ellis was going to be vulnerable to drug addiction because of his condition.

Mr Neville told Judge Hogan that following an incident while on remand in prison, he decided Ellis should be assessed by the Central Mental Hospital. He was admitted there for two months and later released when Dr Paul O’Connell diagnosed him as being paranoid schizophrenic.

Ellis’s mother’s Christina told Judge Hogan that when Dr Moran retired in 2010 she had trouble getting the right medical treatment for her son because she said doctors didn’t understand his condition properly.

She described Ellis as being like two different people, compassionate one day and behaving like a monster was coming out of him the next.

Ms Ellis she had to move her younger children out of the family home because they were frightened by Ellis’s violence.

She said Ellis confessed to her at one point about his drug addiction, saying that he had started “taking everything and anything to stop the voices in my head”.

Ms Ellis agreed that at a previous district court hearing she opposed a bail application because she was “worried for society and worried for my son”.

Judge Hogan ordered that Ellis keep the peace and be of good behaviour for five years on his release from custody.

He also instructed that Ellis be given psychiatric help in prison, that he undergo a drug treatment course, and comply with all requirements made of him.