Inquest hears how shuttering panel fell on farmer, who died from injuries sustained 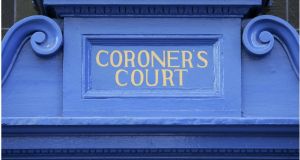 A verdict of accidental death has been returned at an inquest into the death of a Kerry farmer who died while adjusting shuttering on the wall of a farm shed he was building.

Timothy Brosnan (59), of Kilsarcon, Currow, also known as Ted Brosnan, had begun working on a new shed in the farmyard and had put down a foundation and erected a section of shuttering. His son, Timothy, working on a machine, was assisting him.

In his deposition Mr Brosnan jnr, who was about 7.6m (25ft) away, told how his father tried to support the shuttering with his hands but it was too heavy and as he raced towards him the shuttering fell on top of his father.

Mr Brosnan was pronounced dead at the scene. A postmortem found he had sustained a number of injuries and had died from laceration of the spinal cord.

A jury returned a verdict of accidental death in accordance with the medical evidence.

At the close of the inquest, his family thanked their neighbours, gardaí, the priest and emergency services who arrived to help them. The Health and Safety Authority had been informed, but as the farmer was working for himself, their investigation was finished, coroner Terence Casey said.

Mr Casey said farm accidents had increased “dramatically” this year and some were preventable. However, he said that in this case he did not think the accident had been foreseeable.