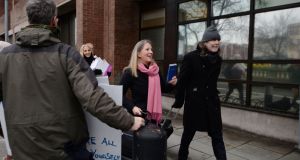 Gemma O’Doherty and John Waters arrive at the at the Four Courts. Photograph: Alan Betson

Judgment in John Waters and Gemma O’Doherty’s appeal, against a refusal to permit them to challenge the constitutionality of laws introduced in response to the Covid-19 pandemic, has been reserved.

Their appeal is against the High Court’s refusal to permit the two of them to bring their challenge and its award of costs of that hearing against them.

The appeal, which is opposed by the State, was before the President of the Court of Appeal Mr Justice George Birmingham, Ms Justice John Edwards and Ms Justice Caroline Costello on Wednesday.

Following the conclusion of submission from the parties Mr Justice Birmingham said the three-judge court reserved its decision, and hoped give to as soon as they can in case where there was a large material of documents in what was a complex matter.

Ms O’Doherty, and Mr Waters claim the High Court’s decision refusing them permission to bring their challenge against the laws was wrong and that they did not get a fair hearing before the lower courts.

They also expressed their unhappiness that “concerned members of the public” were not allowed attend both the hearing of their action and Wednesday’s appeal hearing.

The refusal to allow members of the public attend, Ms O’Doherty said, meant the hearing was “in camera” and not in public.

She said the Irish people and the economy were suffering as a result of draconian and unconstitutional measures brought in over an “alleged pandemic.”

She asked if anyone actually knew somebody who had either died or caught Covid-19.

She added that she was not happy to be asked, by Mr Justice Birmingham at outset of the hearing, to wear a mask in the courtroom.

Ms O’Doherty said that masks did more harm than good, adding that they were a health risk and could cause illnesses including cancer.

She also said more deaths were being caused by hospitals, which she has visited as part of her role as an investigative journalist, putting people onto ventilators in ICU units.

She also questioned the use of methods such as social distancing, the accuracy of Covid-19 testing and the safety of Covid-19 vaccines, and if asymptomatic persons with Covid present a risk to others.

Ms O’Doherty also questioned the accuracy of the official number of deaths attributed to Covid-19 claiming that person who died after “falling off a roof” was classified as deaths from the virus.

Mr Waters said the Court of Appeal should set aside a High Court judgment that was “deeply tainted.” He said that the challenge was brought against laws that were “made off the hoof”.

He compared the restrictions imposed over the last nine months to those introduced after a national emergency was declared by the Irish Government in 1939 after the second World War broke out.

He said from reading about that time in history, people back then were nowhere near as adversely effected by that emergency compared to the current situation.

He also noted that the courtroom contained dozens of yellow-coloured notices urging caution about the virus.

He said that was like if he was before a court on a charge of murder, with a courtroom covered in posters with his name and image stating he was wanted for murder.

Mr Waters also criticised the fact the public could not attend the hearing, as well as voicing criticisms of media reporting of the action since it was first launched in April.

Not supported by evidence

Michael Collins SC, with Patrick McCann SC for the Minister and the State said the applicants’ appeal should be dismissed.

While this was an appeal against a refusal to grant leave their issue was against decision made by the Government, based on medical and scientific advice, against the threat to public health and lives caused by the international pandemic.

Some of their submissions to their appalling and offensive, counsel said.

Counsel said they have made many wild and general assertions, which he said were not supported by any reports or evidence.

Counsel added that the applicants believe the pandemic was “a conspiracy” involving the State, the HSE and the HSE-funded media for monetary purposes, and that the State was controlled by the Chinese Communist Party.

There was no evidence to support those assertions either, counsel.

Mr Waters denied this claim, and said that a large number of reports supporting their case were included as part of their appeal.

Mr McCann said the state rejected claims the hearings were not in public and said that the contentions made about the media’s reporting of the case were unfair.

In addition, Francis Kieran BL for the notice parties said the appeal should be dismissed as their claim was non judiciable, and nothing had been put before the court that would allow them “climb the high legal walls” required for their arguments to succeed.

Counsel adding that some of the applicant’s submissions was “Bermuda Triangle stuff.”

In judicial review proceedings against the State and the Minister for Health, with the Dáil. Seanad and Ceann Comhairle as notice parties, the appellants had sought to have various legislative measures declared unconstitutional and flawed.

They claimed the laws, and the manner in which they were enacted, are repugnant to several articles of the Constitution including concerning the rights to travel, bodily integrity and the family, and amounted to an “unprecedented suspension” of constitutional rights.

Last May Mr Justice Charles Meenan refused to grant them leave and said their claims were not arguable.

They had not provided any expert evidence or facts to support their view the laws were disproportionate or unconstitutional.

The manner in which the Houses of the Oireachtas dealt with the laws, introduced by a caretaker government and voted on by an incoming Dáil and outgoing Seanad, was not something a court could interfere with, he said.

The laws are constitutionally permissible, he held.

The proceedings should have been brought via plenary hearing, involving hearing oral evidence, and not judicial review, he held.

Several supporters of Ms O’Doherty and Mr Waters protested outside the Four Courts complex on Wednesday over not being permitted to attend the hearing.

The number attending the proceedings has been limited due to the Covid-19 restrictions.

While the applicants are physically in the courtroom the three judges and lawyers for the state respondents are attending via video link.