Judge dismisses barrister’s claims she was misled by solicitors 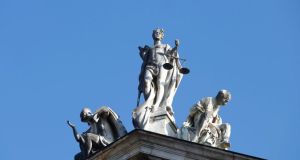 Mr Justice George Birmingham said Daniel Byrne had in 2006 and 2007 operated an “undesirable” and “unusual” business model in selling properties while also acting as solicitor for some purchasers of those.

This was a model “institutionalising potential conflicts of interest” but, while some clients of Mr Byrne may not have been as aware of his dual role, barrister Anna O’Connor was an “eager, indeed aggressive investor” who was “fully aware of the nature of the transactions she was entering into”, the judge found.

He also rejected claims Mr Byrne had made secret profits by not disclosing to Ms O’Connor he had purchased both investment properties before selling them on to her.

The documents related to the sale and purchase of the two properties at Annesley Bridge, Fairview and New Cabra Road.

He was giving judgment dismissing proceedings by Ms O’Connor, a barrister of some 25 years, against Daniel Byrne, who was principal of Daniel J Byrne & Co, Ormond Quay, Dublin, until he ceased to practise as a solicitor in early 2008, and Tara Byrne, now principal in Daniel J Byrne & Co.

In the case, which the judge described as having “much in common with the plot of a novel”, Ms O’Connor sued both solicitors seeking damages on grounds including alleged breach of contract, negligence, deceit and injurious falsehood.

The judge noted the relationship between Ms O’Connor and the defendants arose from her son and Mr Byrne having become friendly while both were law students.

While Ms O’Connor had insisted she was unaware she was acquiring the Annesley Bridge property from Mr Byrne for €1,080,000 via a sub-sale, the judge found the relevant documents left “no room for doubt” she was so doing.

He also rejected her claim the true value of that property in 2007 was €675,000 and the solicitors allowed her to pay substantially over the odds for it.

Call for investigation into failure of Fermoy flood-relief scheme 11:40
Number of people in hospital with Covid-19 drops to 597, according to latest figures 10:56
Baarack the overgrown Australian sheep shorn of his 35kg fleece 09:57
Gardaí believe shooting of 17-year-old in Dublin was failed murder attempt 08:44
Covid-19: Vaccination programme ‘chink of light’ for travel industry 06:00