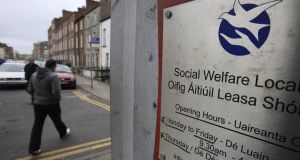 The court heard the payment failure was because the homeless woman did not show she was ’currently residing’ in the relevant social welfare catchment area. File photograph: Peter Muhly/AFP

A woman who held onto her part-time job after becoming homeless, has won her appeal over the State’s failure to pay her Jobseeker’s Allowance for several months. The court heard the issue arose because she did not show she was “currently residing” in the relevant social welfare catchment area.

The Court of Appeal ruled that failure was outside the power of the Minister for Social Protection. It also expressed concern it had heard “nothing” from the Minister’s side that addressed the “simple” question as to where a homeless person is meant to apply for Jobseeker’s Allowance in the future.

Giving the three judge court’s judgment on Tuesday, Mr Justice Robert Haughton said the woman is an EU citizen who came here from Latvia nine years ago and her position over the relevant months , April to September 2016, was a “sad one”.

In 2016, she was earning between €60-180 weekly as a sales assistant in a Dublin shop. Due to her low means, she was entitled to access social welfare payments while working her part-time job.

After becoming homeless in early 2016, she resorted to “couch surfing” with friends in Dublin and other locations, used hostels other nights when she had money to do so and also slept rough in Dublin Airport and two rail stations.

It was “little wonder” her mental and physical health were affected by the stress of being homeless, and it was a “testament” to her, during this time, she continued to work part-time.

Rejecting the Minister’s arguments the case was now pointless because arrears of Jobseeker’s Allowance were later paid to the woman, he said the court would make declarations to ensure “all possible support” to homeless persons who have entitlements and because the woman might again find herself homeless and seeking Jobseeker’s Allowance in the future.

“It is a distressing fact that in our society, there are many homeless people, most recent published estimates suggesting in excess of 10,000,” he said.

Some homeless people may find work while some working people, like this woman, might become homeless and find themselves applying for Jobseeker’s Allowance when they cannot prove they are “currently residing” within the relevant catchment area.

The judge said he was disposed to declare the Minister acted outside her powers in requiring the woman, when applying for Jobseeker’s Allowance while homeless, to prove she was “currently residing” in the particular catchment area.

He was also disposed to declare that, when the woman’s solicitor Eileen McCabe wrote to the Department on September 14th 2016, the Minister acted unlawfully in failing to have in place, or to publicise, any appropriate process for inviting, making, receiving and determining applications for Jobseeker’s Allowance from a homeless person.

The exact wording of the declarations will be decided later.

The judge refused damages on the basis there was insufficient evidence to dispute a €2,450 sum paid to the woman after her case was initiated did not amount to full payment of Jobseeker’s Allowance arrears. General damages could not be pursued because no claim for misfeasance in public office was made, he also held.

Represented by Feichín McDonagh SC, with Brendan Hennessy BL, the woman appealed after losing High Court judicial review proceedings over not being paid Jobseeker’s Allowance between April and September 2016. She got the allowance in January 2017, with payments back-dated to April 2016.

In November 2015, she moved to shared accommodation in Clondalkin and applied to have her Jobseeker’s Allowance processed by the Department’s Intreo office there. She alleged delay processing her application and said she had to leave her Clondalkin accommodation in February 2016 because she could not afford the rent.

She claimed the Clondalkin office told her in May 2016 it could not deal with her case because she was homeless and she should contact the Department’s homeless unit which told her it did not process Jobseeker’s Allowance applications.

In July 2016, when she looked for housing assistance from Dublin City Council, she was referred to South Dublin County Council which referred her back to Dublin City Council who put her in emergency accommodation. Due to “open drug use” and incidents of violence, she left that to stay with friends and, if she had enough money, in hostels or elsewhere.

The Department denied it “refused” Jobseeker’s Allowance and argued her application was “closed” in May 2016 because she failed to provide necessary documents, including evidence she was living in the Clondalkin office’s catchment area. It said it was unable to contact her and supplementary welfare payments were paid to her on various dates.