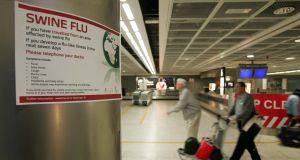 An action by a woman who claims she suffered narcolepsy after receiving the swine flu vaccine is among 70 cases initiated here over the vaccine.

Aoife Bennett is among those suing the Minister for Health, the HSE and Glaxosmithkline (GSK) Biologicals S.A in the High Court over being given the Pandemrix vaccine against “human swine flu” in the period 2009-2010.

Her case was before the Master of the High Court on Thursday when he granted a preliminuiary application to join the Health Products Regulatory Authority (HPRA), formerly the Irish Medicines Board (IMB), as a defendant.

Ms Bennett, from Naas, Co Kildare, claims she suffered injuries including narcolepsey and cataplexy disorder, fainting fits, as a result of being given Pandemrix in 2009.

The application to join the HPRA came after her lawyers discovered information about the vaccine’s safety records furnished by GSK in 2009-10 to the then IMB.

The IMB, which became the HPRA in 2014, is a State body whose role is to protect and enhance public health by regulating medical products.

It is alleged the safety reports show a “particularly striking” difference between the number of adverse effects in those given Pandemrix and a similar vaccine also made by GSK.

Had parents been aware of the “vast difference” in the numbers of people who had adverse effects from the respective vaccines, they would not have given their consent to the administration of Pandemrix to their children, it is claimed.

As a result of the documents, Ms Bennett claims the HPRA owes a duty of care to persons given Pandemrix, including relating to how the safety and appropriateness of the vaccine was monitored.

She alleges that the manner in which the HPRA performed its functions breached those duties.

In a sworn statement seeking to have the authority joined, Ms O’Connor said the application followed examination of 4,500 documents discovered to the plaintiff by GSK.

The HPRA was not represented at Thursday’s hearing but, in her sworn statement, Ms O’Connor said it has said in correspondence the board would not be admitting any culpability in the matter.

Ms O’Connor said the discovery process had revealed the IMB had data concerning the safety records of Pandemrix which is made in Dresden, Germany and a very similar vaccine also used to treat swine flu made in Quebec, Canada, called Arepanrix.

There are some differences in the manufacturing processes between Quebec and Dresden, Ms O’Connor said.

The safety records show the level of adverse effects in those administered Pandemrix ranged between 10 and 7 times higher than the Canadian made product, she said.

One report from late 2009 stated, of the tens of millions of vaccines administered, there was a serious adverse effect rate of 75.9 per million for Pandemrix compared to 7.9 per million for Arepanrix. The type of adverse effects listed in the reports range from conditions such as convulsions, facial palsy, to stillbirth and fatal outcomes in those who got the vaccines, she said.

Ms O’Connor said the discovered material did not indicate the IMB made the information it had received available to the Minister or the HSE immediately after it was received, or at all.

A representative of the IMB attended all meetings of the National Public Health Emergency Team, which was set up by the Department of Health to oversee the administration of pandemic vaccines, she said.

While discovery is awaited on those meetings, no minutes were recorded regarding adverse effects of Pandemrix at meetings to monitor and oversee the swine flue virus, she said.

A HSE brochure issued to the public in 2009 about swine flu contained information to the effect it was safe to use Pandemrix, it had been appropriately tested and side effects were rare.

Mrs O’Connor said the reality, which she said was known to the Irish Medicines Board, was not all the conclusions contained in the brochure were warranted. Pandemrix was not adequately tested on children and young people before it was licensed, she said.

1 ‘This was like a nuclear bomb’: More than 2,700 injured in Beirut explosion
2 Pubs to stay closed and restrictions to remain on all gatherings, Cabinet decides
3 Hume brought to Derry as candles in windows light his way
4 Boy’s treatment by school over alleged thefts was ‘unbelievable’, judge says
5 Irish in Canary Islands: Life has changed dramatically
Real news has value SUBSCRIBE