Multi-millon euro costs of case to be met by State; No admission of liablity in terms 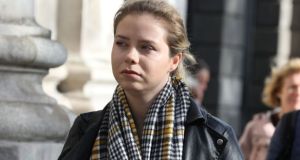 Aoife Bennett (26) claimed she developed narcolepsy and cataplexy disorder as a result of being given the Pandemrix vaccine in school on December 10th, 2009.

The case taken by a woman who claimed she developed narcolepsy as a result of being given the Pandemrix swine flu vaccine, has been settled.

There was no admission of liability in the settlement terms in what was considered a test case for another approximately 100 people who believe they developed the life-long condition as a result of taking the vaccine.

The multi-million euro legal and other costs of the case are to be met by the Minister for Health and the HSE. The other defendants in the case were the manufacturers of the vaccine, GlaxoSmithKline Biologicals, and the Health Products Regulatory Authority (HPRA).

It was previously reported that the discovery process in the run-up to the trial had incurred costs of more than €2 million. The proceedings before the High Court were on their 22nd day, and involved four teams of barristers.

No mention of money being paid to the plaintiff as part of the settlement terms was made in court, although outside afterwards the family said compensation had been paid.

On Tuesday Denis McCullough SC, for Aoife Bennett (26), of Lakelands, Naas, Co Kildare, told Mr Justice Michael McGrath the case had been settled with no admissions of liability on behalf of any of the defendants.

He said that to the extent any allegations of lack of bona fides were made against any of the defendants, the plaintiff confirmed that they have been withdrawn.

Mr Justice McGrath expressed his congratulations to the litigants for managing to settle the case through mediation, and in particular to Ms Bennett and her family.

He said he had no doubt but that they were very decent people and he was sure that it had been explained to them that litigation and its outcome was an uncertain process.

Outside the Four Courts Ms Bennett’s mother, Mary, read a statement on behalf of her daughter and said it was a national scandal that millions of euro of taxpayers’ money had been “wasted” in defending the case.

Standing beside her daughter and her husband, Pat, she said she wanted to thank Aoife for her bravery and courage in taking the case against the State and a large multinational company.

“Today, Aoife succeeded in recovering compensation,” she said, but no money would ever compensate Aoife for a lifetime of living with the incurable disability of narcolepsy and cataplexy.

She said she hoped the settlement would pave the way for payment of compensation to the 100 other people who, like Aoife, claim to have been “injured by the Pandemrix vaccine”.

She said the State Claims Agency had taken a “very adversarial approach” in the case. Her family had no access to legal aid while the defendants had access to “unlimited taxpayers’ monies”.

The trial heard that as part of the conditions for supplying the vaccine, which was brought to market in an expedited process amidst fears of a global swine flu pandemic, the Government agreed to indemnity GSK against any costs that might arise from people alleging damage.

Ms Bennett questioned why the State didn’t follow the approach in the UK where similar claims to her daughter’s were being settled for the past three years.

In the case Ms Bennett claimed she developed narcolepsy and cataplexy disorder as a result of being given the Pandemrix vaccine in school on December 10th, 2009, as part of a nationwide vaccination programme. She was aged 16 at the time, and began to suffer symptoms within weeks.

In the proceedings it was claimed HSE brochures on the vaccine gave inadequate warnings as to the safety of the vaccine .

The case was solely concerned with the issue of liability and the defendants denied the claims and denied liability. If Ms Bennett had won the case, a new set of proceedings would have followed immediately to assess damages.

Douglas Clarke SC, for GSK, told the trial that despite years of research since 2010, when the vaccine was first linked with narcolepsy, research had yet to show a proven link.

Dermot Gleeson SC, for Ms Bennett, said the HSE had failed to give adequate information to his client about the risks associated with the vaccine, so as to allow her to make an informed decision about accepting it.

The number of people in Europe who may have developed narcolepsy as a result, is estimated at approximately 100,000.