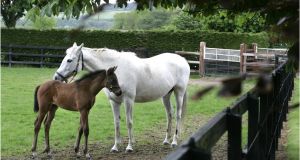 University of Limerick is being sued for alleged defamation and reputational damage as a result of how it reacted to allegations by two female students while on placement at a stud farm. File image: Dara Mac Dónaill/The Irish Times

An Irish vet who runs a stud farm in Japan has sued the University of Limerick alleging defamation and reputational damage as a result of how it reacted to allegations by two female students about his behaviour towards them while on placement at the farm.

Dr Harry Sweeney, with addresses at Dunshaughlin, Co Meath and Hokkaido, Japan, and Y K Paca Paca Farm, Hokkaido, Japan, are, in three different cases, suing UL and each of the students over alleged defamation.

The plaintiffs claim there is no basis to claims by the students about the behaviour of Dr Sweeney towards them while on placement there between January and March 2014 as part of their UL courses in equine studies.

The plaintiffs also claim, with no warning to them, two of the three UL students on placement, were collected by taxi and driven away from the farm on March 19th 2014.

That occurred after the two students contacted their parents seeking to go home and the parents in turn contacted UL which sought assistance from the Irish embassy, Luán O Braonáin SC, for UL, said.

As a result, Dr Sweeney and the farm claim the Irish Ambassador to Japan decided at short notice to cancel a high-profile visit by the Minister for Children to the farm scheduled for that same day and this, they claim, damaged the reputations and standing of the plaintiffs internationally.

The plaintiffs also claim difficulties had emerged with the two students during their placement and Dr Sweeney had informed one of them, following an incident on March 16th 2014, she should consider herself suspended while her behaviour on the farm was being considered.

The following day, St Patrick’s Day 2014, Dr Sweeney says he sent emails to UL notfifying it of “extremely serious difficulties” with some students on placement and stating consideration was being given to sending one of them home.

He claims he had a long conversation with an agent of UL on March 18th about difficulties being experienced with the students.

UL has yet to deliver a defence to the case against it.

The High Court heard on Thursday solicitors for one of the students have alleged in correspondence she will claim Dr Sweeney was inappropriate, offensive and bullying towards her and had sexually harassed her.

The solicitors also wrote the student will allege that, some months before the placement started, she was interviewed in Ireland by Dr Sweeney during which she and other interviewees were asked to stand up mid-interview and slowly turn around so she might be inspected physically.

It also claimed he had engaged in inappropriate conversaiton, including asking her whether she was in a relationship. The solicitors further alleged no university representative was present.

In correspondence on behalf of Dr Sweeney, all those claims were strongly denied. It is also claimed the students had fabricated claims against Dr Sweeney to avoid repercussions about their alleged behaviour.

The plaintiffs’ case against UL was before Ms Justice Miriam O’Regan on Thursday via a pre-trial applicaiton by UL to have all three cases consolidated.

Mr O Braonáin told the court the two students’ parents had contacted UL seeking to have the students brought home and, because UL was concerned about the students’ mental health, it contacted the Irish Embassy in Tokyo for assistance.

The consolidation application was reisted by Miriam Reilly SC, for the plaintiffs, on grounds including the UL case raised very different issues from those in the cases against the students, including claims of breaches of fair procedures. UL made no attempt to hear Dr Sweeney’s side before acting to have the students removed, she said.

UL had also said in correspondence it does not itself know anything about what occurred between Dr Sweeney and the two students and therefore could not offer evidence in that regard, the court was told.

The judge will hear final arguments on the application on Friday.