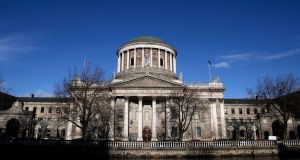 Mr Justice Charles Meenan directed the application for judicial review be made on notice to Maynooth University, and returned the matter to later this week. Photograph: Chris Maddaloni/Collins

A student teacher has brought High Court proceedings against Maynooth University over not being permitted to graduate this year because she had not built up sufficient teaching experience to enable an assessment.

Ekaette Kwuogor, originally from Nigeria and now a naturalised Irish citizen, says she was not able to complete her teaching practice after the Covid-19 pandemic forced schools to close.

Ms Kwuogor, of Cappagh Road, Finglas, Dublin, had been studying for a higher diploma in further education at the university’s department of adult and community education.

She was accepted into the programme for the 2019-20 academic year, and last January commenced the teacher training part of her course.

The court heard she was delayed in starting her teaching practice as a result of having to furnish police clearance reports from An Garda Síochána and police in Nigeria.

The court heard there was a delay in the issuing of the Nigerian police report, which she had to provide before she could commence the teaching practice.

Arising out of the Covid-19 pandemic, schools were closed last March, and she and her classmates could not continue their teaching practice modules.

In April she was informed by the college she could not graduate this year as she had not had sufficient opportunity to gain teaching experience on placement for an appropriate assessment to take place. She was told she would have to complete her course in the 2020-21 academic year.

She appealed the decision not to allow her to graduate, but has not received any word of the outcome of that appeal.

She claims the delay in making the decision is inordinate, inexcusable and in breach of her rights to natural and constitutional justice.

The court heard she attended every class, carried out every assignment and was a “model student”.

She had even started her teaching practice when other members of her class were on holiday, said her counsel Femi Daniyan, instructed by solicitor Geoffrey Nwadike.

Counsel said his client was particularly concerned over the failure to make a decision in relation to her appeal as the new academic year was about to commence.

In proceedings against the National University of Ireland, Maynooth, Ms Kwuogor seeks various orders including one compelling the college to make a decision on her appeal. She claims she is entitled to a decision or a time frame on the finalising of her appeal.

When the matter came before Mr Justice Charles Meenan on Monday via an ex-parte application (one side only represented), he directed the application for judicial review be made on notice to the university, and returned the matter to later this week.