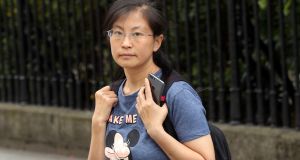 Cheng Zhang pictured leaving the Four Courts after she was awarded €256,000 in damages over a car accident. Photograph: Collins Courts.

An accountancy student has been awarded more than €250,000 in damages after a High Court judge found she suffered post-traumatic stress disorder after being knocked down by a car in Dublin.

The total award to Cheng Zhang (36) by Mr Justice Anthony Barr was €465,526 but he reduced it to €256,000 after finding 45 per cent contributory negligence on her part due to crossing a junction when the pedestrian light was red.

Ms Zhang became profoundly mentally unwell as a result of the accident on April 17th, 2011. She could no longer work, lost her only source of income, fell into rent arrears, became homeless and needed local authority emergency accommodation, the judge noted.

Given the level of intgelligence, ambition and high level functioning Ms Zhang had demonstrated, he was satisfied that but for the accident she would probably have gone on to qualify as a certified accountant and secured employment.

Ms Zhang, from the Liaoning province of China, came to Ireland in 2003 to study English and was studying accountancy at the time of the accident.

She sued Stephen Farrell, of Shelbourne Park Apartments, Ringsend, Dublin, who was driving the car, as a result of the accident.

She claimed she suffered a blow to the head and soft tissue injury to her knees and pelvis and was unable to move or communciate for about an hour after the accident.

The defence argued Ms Zhang had a myriad of physical complaints for which no organic basis could be found and now suffers from an anxiety disorder.

Mr Justice Barr accepted evidence of Ms Zhang’s psychiatrist that she suffered extensive and extreme mental health issues triggered by the road accident and, following the accident, there was a catastrophic change to her mental state. He also accepted Ms Zhang’s symptoms are severe, chronic and enduring despite treatment efforts to date.

The judge said he had had the opportunity of observing Ms Zhang, who represented herself, and she had an excellent command of English and excellent knowledge of the paperwork in the case. She was able to deal with lengthy and robust cross examination at the hands of very experienced senior counsel and was “totally alone” as a lay litigant.