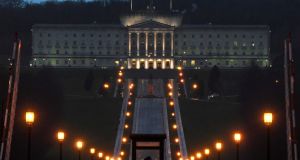 The Stormont Executive has failed in its legal duty to adopt an Irish language strategy, a High Court judge ruled on Friday.

Mr Justice Paul Maguire held the administration to be in breach of a requirement imposed under decade-old legislation.

He said: “It cannot have been the intention of parliament that after nearly 10 years from the coming into force of the Act in 2007 this obligation would remain unfulfilled.”

His verdict came in a challenge mounted by campaign group Conradh na Gaeilge.

The body issued judicial review proceedings over a failure to comply with a pledge stretching back to the 2006 St Andrews Agreement.

Its lawyers argued that the Executive was in breach of a statutory duty and sought an order that it must implement plans for enhancing and protecting the language’s development.

They also claimed the powersharing regime had done nothing about its ongoing obligation since rejecting a blueprint in 2015.

A 20-year strategy for Irish was published at that time following consultation by former minister for culture Carál Ní Chuilín.

Counsel for Conradh na Gaeilge contended that the failure to take any further steps contravenes the 1998 Northern Ireland Act.

She insisted the Executive could not be allowed to do nothing after rejecting that strategy.

The court also heard that the government was committed to implementing a European Charter for Regional or Minority Languages.

A barrister representing the Executive countered that there had been no “inertia” on the issue.

He also rejected any suggestion of a “sham process” and maintained that the draft strategy was properly assessed.

But the judge held there had been more than a reasonable time for the Executive Committee to perform its obligation.

He agreed to make a declaration that it had failed to adopt a strategy, in breach of a statutory duty under the Northern Ireland Act.

“It cannot escape its obligation by seeking to blame others,” he said.

“The Executive Committee remains the key body which has been at the centre of the delivery of government in Northern Ireland and it cannot simply avoid doing what the law requires.”

UK parliament would have been aware of the difficulties in finding a political consensus for devising a strategy to enhance and develop the Irish language in Northern Ireland, he acknowledged.

Despite this, the judge said it had imposed the statutory obligation on Stormont to implement rather than merely consider a blueprint.

He concluded: “The result, after nearly 10 years, is that the purpose of section 28D [of the Act] to require the Executive Committee to adopt a strategy as aforesaid has been frustrated and section 28D has been robbed of any practical effect.”