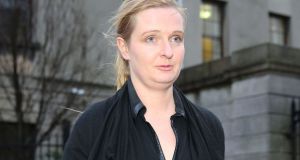 The €1 million bill for the wedding of Ciara Quinn in 2007 was paid by the Slieve Russell Hotel company but that bill was never repaid, Paul Gallagher SC said. Photograph: Collins

Seán Quinn’s family used the Quinn Group as their “personal bank” and “raided” it for almost €2 billion to fund significant losses from investments related to shares in Anglo Irish Bank, property acquisitions and lifestyle expenses, the High Court has been told.

The personal expenses included a €1 million bill for Ciara Quinn’s wedding in 2007, which was paid by the Slieve Russell Hotel company and never repaid, Paul Gallagher SC said.

The Quinns took “far in excess” of what they were entitled to and jeopardised the financial stability of a group projected in 2010 as worth €3 billion when it was in fact insolvent, he said.

They used whatever cash they could to fund “enormous losses”, including funds taken out of Quinn Insurance, which now has a shortfall of more than €1 billion, he said.

A sum of €511 million was also raised in late 2007 to loan money to the Quinn Group to “repair holes” in its finances and meet requirements of banks and bondholders.

An expert for Irish Bank Resolution Corporation (IBRC) had reported, by the end of 2008, that there was “effectively no value” left in the Quinn Group and it had been “raided” by the family for almost €2 billion, including €1.6 billion in 2007 alone.

The Quinn group was “wholly insolvent” in 2011 but the evidence will be that the companies were insolvent much earlier but that went unnoticed by banks and bondholders because significant transactions in the accounts were “falsified”, he said.

The five adult Quinn children are presented as “naive and unsophisticated” but they engaged in complex and sophisticated transactions, he said.

They also “orchestrated” a “sophisticated and devious fraud” involving taking assets from the Quinn international property group intended to go towards repaying €2.3 billion owed to Anglo, he said.

Against this background, the children’s action disputing liability under personal guarantees and share charges concerning Anglo loans to Quinn companies on grounds including that the bank acted in an “unconscionable” way is “extraordinary” and “beggars belief”.

Mr Gallagher was setting out the opening statement by IBRC, into which Anglo was nationalised following its collapse, opposing the case in which Aoife, Brenda, Ciara, Colette and Seán Quinn jnr contend guarantees and share pledges signed by them are invalid and have no legal effect.

The five claim the guarantees were required by Anglo for loans advanced by it to Quinn companies to unwind contract for difference (CFD) positions held by their father in the bank.

When the CFDs were unwound into Anglo shares, one portion was purchased by a group of investors known as the Maple 10 and the rest by the Quinn Group. The Quinn shares were transferred to six Quinn-owned Cypriot companies, which ultimately got €498 million from Anglo.

The children claim the securities provided by them are invalid on grounds including “unconscionable bargain” and breach of duty by the bank to them, especially to advise them.

They dispute they have a liability of some €83 million each under the guarantees or liability in relation to their share pledges.

On Tuesday, Mr Gallagher told Mr Justice Garrett Simons the children were the controlling shareholders in Quinn Republic of Ireland, the core group company, and had signed a shareholders’ agreement under which they were to get a continuing and important role in the company’s business.

The children were painted as living on modest salaries, having no business experience and an inability to understand or get independent advice about documents signed by them, he said.

The “truth” is they were “highly intelligent” with salaries that did not reflect the privileges they enjoyed and “so immensely privileged” they did not have to go through documents on their own.

They knew what they were signing, had expert help, access to the “best advice” including legal advice, and delegated to agents the task “of what the rest of us would regard as donkey work”.

They had “most experienced and capable” people within the Quinn group who knew about all these documents, he also said.

IBRC rejected any idea those people were engaged in “some plot” to get the children to sign the signature page of documents or the children did not know what they were doing.

This was an “extraordinary” and unique case where the children appeared to be saying they should have got “enormous” borrowings without giving securities they had previously given countless times, he said.

It was also a “nonsense” to allege undue influence by their father when he had conferred on them the shares in Quinn Republic of Ireland and set up an investment company, Bazzely, for their benefit and an international property group with assets of some €500 million.