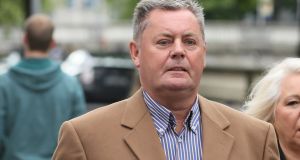 An RTÉ studio supervisor has settled his High Court action over allegedly suffering constant whistling in his ears after part of a toilet roll dispenser fell on his head as he sat on the toilet at Montrose.

Christopher Bardin claimed he was sitting on the toilet for the disabled in the audience holding area adjoining Studio Four when the cover of the toilet roll dispenser unexpectedly opened and hit him on the left side of the head.

He claimed he has suffered tinnitus in his left ear following the incident on May 26th, 2008.

Mr Bardin, who has worked at RTÉ for 39 years, has also filed another personal injuries claim over an alleged incident in 2012, which he claims significantly exacerbated his tinnitus condition.

He alleges failure to adequately repair and maintain the toilet roll dispenser’s latching device and failure to ensure safety of the toilet facilites.

He claims he has suffered diminution of his enjoyment of life and has great difficulty sleeping because of the constant whistling in his left ear.

When the case opened on Wednesday, Mr Justice Bernard Barton was told liability had been admitted and the case was before the court for assessment of damages only.

On Thursday, the judge was told it had been settled and could be struck out.