Approval given with ‘no assessment of what comes out of pipe’, High Court hears 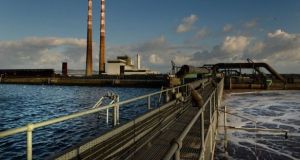 A view of the Ringsend waste-water treatment plant, which the proposed €500 million plant at Clonshaugh, north Dublin is intended to supplement. Photograph: Cyril Byrne

A proposed €500 million waste-water treatment plant at Clonshaugh, north Dublin, got planning approval “without any meaningful assessment of what comes out at the end of the pipe”, the High Court has been told.

Oisín Collins SC made the claim on Tuesday when opening proceedings by Sabrina Joyce-Kemper, one of a number of local residents objecting to the development intended by Irish Water to supplement the Ringsend waste-water treatment plant.

The hearing, before Mr Justice Senan Allen, involves a “telescoped” hearing via video-link of an application for permission for judicial review and the review itself. The case, listed for 10 days, is against the board and the State, with Irish Water as a notice party.

Among various claims, it is contended that the planning approval was given contrary to the requirements of two European directives – the environmental impact assessment directive and habitats directive – lacked sufficient reasons and was contrary to fair procedures. The board denies the claims and it and Irish Water argue Ms Joyce-Kemper has limited legal standing and should be confined to raising issues she raised before the board during the public consultation process concerning the development.

Irish Water sought the development to cater for future population growth and because the Ringsend plant is operating over capacity, resulting in discharges of partially treated sewage into Dublin Bay.

The plan involves 13km of underground orbital sewer from Blanchardstown to the Clonshaugh plant and a 12km outfall pipeline to bring the treated waste water to Baldoyle and out to sea.

The planning application was preceded by a pre-application consultation process, which began in October 2012 and continued for five years. Ms Joyce-Kemper says, for much of the process, Irish Water proposed to construct a much larger plant in two consecutive planning application processes. Towards the later stages of the consultation, Irish Water said it would construct the treatment plant in a single phase to treat a population equivalent to 500,000 people rather than the 800,000 people originally envisaged, she says.

Opening the case, Mr Collins said planning approval was given without a proper environmental impact assessment or appropriate assessment of the development that was ultimately approved, as opposed to the larger development originally proposed. There was an element of prejudgment or bias in the board’s approach, he argued.

Ms Joyce-Kemper, a daily sea swimmer, has a particular concern about the impact on water quality in Portmarnock, which is adjacent to the location of the outfall pipe, and she is generally concerned about the environmental impact, he said.

There is an onus on the Environmental Protection Agency and the board concerning limiting emissions and this fell under the ambit of the EPA’s water licensing procedure, he said. There had been “no meaningful interaction” between the two bodies as required of them as competent authorities under European law, he said.

The EPA had said nothing more than that it would conduct its own environmental impact assessment as required by European law, he said, adding the development would generate significant sludges that would need to be spread on land but that landspread did not appear to fall within the development consent and had not been properly assessed. The argument that Ms Joyce-Kemper was limited to raising issues she had previously raised before the board during the planning process was incorrect as a matter of national and European law, he submitted.