Priest’s hand-made replacement will did not revoke original will, judge rules 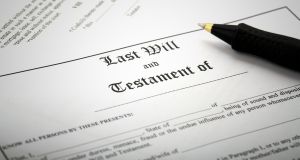 A deceased Catholic priest’s original hand-made will remains valid and was not revoked by a later will also made by him without legal assistance, a High Court judge has ruled.

Fr Patrick John Mannion’s object in avoiding lawyers’ fees has “spectacularly failed”, as the costs of the application concerning the wills must be borne by his estate, Mr Justice Senan Allen remarked.

Fr Mannion, of Killoran, Ballinasloe, Co Galway, served as a parish priest in Texas between 1989 and 2007, when he retired and returned to Ireland. He died in September 2017, aged 82, survived by two siblings and three children of another sibling who died before him.

He made a will in 1997 in which he left whatever motor vehicles he owned at the time of his death and his Kimball upright piano to an order of nuns in Texas. He left his books to a friend, Virginia Guadiano, whom he appointed as his executrix, and the rest of his estate, two bank deposits, one in Ireland and one in Texas, to the Missionaries of Charity at East Street, Bronx, New York.

The 1997 will was witnessed by two men, Juan Martinez and Raul Hernandez and Fr Mannion gave a copy of it to Ms Guadiano’s daughter for safe-keeping.

Ms Guadiano later applied to the High Court in Dublin to determine whether the 1997 will was revoked by a later will of the priest’s, apparently made in 2014.

In his judgment, Mr Justice Allen was satisfied the 1997 will was executed in line with the requirements of Texan and Irish law and the copy of that provided to the court was a true copy of the original.

He said, before Fr Mannion left Texas in 2007, he collected his original will from Ms Guadiano and told her he intended to replace her as his executrix with his nephew, Mr Shields.

The latter confirmed his uncle asked him in 2014 to act as his executor and handed him a sealed envelope which he said contained his will, asking it not be opened until his death.

When the envelope was opened in 2017, it contained what Ms Guadiano described as “a curious document” and what her solicitor described as a “confection”.

The 2014 document comprised six sheets of paper, stapled together. The first five pages were each marked, as was the 1997 will, “..LAST WILL”, and were all signed by Fr Mannion. Unlike the 1997 will, at the end of each of the first four pages, beside Fr Mannion’s signature, were the initials “JM” and “RH”.

Mr Martinez has since died and Mr Hernandez had sworn he does not recognise the initials “R.H” as his writing, the judge said.

From the condition of the 2014 document, the judge inferred Fr Mannion, having returned to Ireland, decided to change his will by naming Mr Shields as executor, inserting a revocation clause and altering the directions concerning motor vehicles, books and the rest of his estate.

Whatever Fr Mannion may have intended, it was “fairly obvious”, when the envelope was opened in 2017, it was not a valid will, the judge said. The original pages of the 1997 will were missing and replaced by pages the priest apparently believed would be entitled to probate. Page 4 of the 1997 will survived and was central to the manufacture of the 2014 document.

The deconstruction of the 1997 will and the confection of the 2014 document happened at the same time and were “wholly interrelated”, he inferred.

Fr Mannion “clearly intended not to die intestate” but his intention to revoke the 1997 will was conditional on the validity of what he intended would be its replacement, he said.

That condition was not met, with the effect no new will was made and the copy of the 1997 will, with one original page, was entitled to probate, the judge concluded.