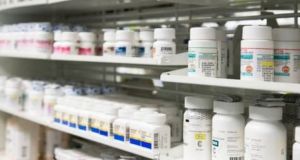 The pharmacist said he had “developed significant issues arising from mental health and, as a consequence, have now developed an addiction to alcohol and medication”. Photograph: Getty

A superintendent pharmacist has been suspended from practising by the High Court on grounds of a risk to public health and safety.

The suspension applies pending disciplinary procedures relating to a complaint alleging he had dispensed the wrong product, left methadone for patients in an alleyway or a bookie’s shop, attended at the pharmacy while drunk and sought to conceal taking of medication by asking staff to leave the pharmacy.

The pharmacist, who cannot be identified by court order, had accepted he should not be practising as a pharmacist for the time being and said he had “developed significant issues arising from mental health and, as a consequence, have now developed an addiction to alcohol and medication”.

While he offered an undertaking not to practice, the Pharmaceutical Society of Ireland decided to seek a suspension order from the court for reasons including the overall seriousness of the allegations.

The suspension order was granted by Mr Justice Richard Humphreys last week and his written judgment on the matter was published on Wednesday.

He found that a risk, as specified in section 45 of the Pharmacy Act 2007, exists to the health and safety of the public of such magnitude as to warrant suspension.

In material respects, an undertaking is less effective in addressing the risk than an order for suspension, he ruled.

He also made orders permitting the Society to amend the “public-facing” online register of pharmacists — essentially a summary of the official register — to allow the Society indicate the pharmacist is suspended, and to notify interested parties.

The judge said his judgment appeared to be the first written judgment on the suspension of pharmacists under section 45, although the principles in relation to suspension of other professionals are closely related.

He noted the respondent has voluntarily ceased to be superintendent pharmacist of the pharmacy concerned, had not worked there since the day after the complaint was made, no longer holds keys or passwords and has resigned as a director of the company operating the pharmacy.

In his judgment, he said “risk” means the risk independent of the application of the regulatory regime against the practitioner.

He disagreed with Simon Mills SC, for the pharmacist, that suspension was “draconian” when an undertaking had been offered, saying the practitioner will not be practising anyway.

He rejected arguments concerning the impact on the pharmacist’s good name and reputation, saying “that is affected either way”.

On arguments that, because the case concerned a health issue, it was preferable to respond to the pharmacist’s engagement, he said it may be more likely to be in the respondent’s long term interest “to have to face up the consequences”.

He agreed with Zoe Richardson, solicitor for the Society, that, where there are addiction issues, that could dilute the meaning and effectiveness of an undertaking.

Ms Richardson had said certain features of the evidence and allegations against the respondent suggested “some degree of unreliability in relation to the assurances proffered by him prior to this point”, he noted.

The existence of a specific statutory offence of practising while not having a current registration did not apply if one simply gives an undertaking and that dilutes the effectiveness of an undertaking, he further held.

The terms of the Society’s public-facing register, and the information available to third parties, should reflect the respondent’s non-practicing status and that was more appropriately achieved by a suspension order, he said.

In concluding observations, he noted “possible inflexibilities in the legislation” were highlighted in the case and the Oireachtas is considering this area via the Regulated Professions (Health and Social Care) (Amendment) Bill 2019.

While any decision is entirely a matter for the Oireachtas, the legislative scheme might be improved, including by having a statutory basis for voluntary administrative suspension as an alternative to compulsory judicial suspension, he said.