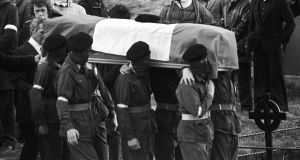 A pensioner has ended her Northern Ireland High Court action against the Equality Commission over the naming of a playground after an IRA hunger striker.

Lawyers for Bea Worton accepted that part of her challenge had been rendered academic by the body rescinding its previous stance on a local council’s decision to call the site in Newry after Raymond McCreesh.

A judge agreed to dismiss the case against the commission and ordered it to pay half the 88-year-old’s legal costs up to the point it reached its new position that Newry, Mourne and Down District Council must do more to remedy the situation.

Ms Worton’s continuing bid to judicially review the Newry, Mourne and Down District Council for alleged bias in the decision-making process for the playground’s name has been adjourned for six weeks.

Her son Kenneth was one of 10 people massacred by the IRA at Kingsmill, Co Armagh, in 1976.

The court was previously told that McCreesh was reportedly in possession of a rifle used in the killings when he was captured later that year.

According to Ms Worton’s legal team, she was left shocked and outraged by the insensitivity of the playground decision.

Controversy has continued to surround Raymond McCreesh park since councillors voted to retain its name in February last year.

McCreesh, from Camlough in Co Armagh, was one of 10 IRA prisoners who died in the hunger strike in the Maze Prison in 1981.

His convictions included attempted murder, conspiracy to murder, possession of firearms with intent to endanger life and IRA membership.

Part of Ms Worton’s legal challenge involved a claim that the naming process breached Section 75 of the Northern Ireland Act, which requires public authorities to promote good relations between those of differing religious backgrounds or political opinion.

The Equality Commission, according to Ms Worton’s legal team, should have found against the local authority and referred the matter to the secretary of state.

In court on Tuesday, however, David Scoffield QC, for Ms Worton, confirmed that the commission has now rescinded its previous position.

“The Equality Commission has gone back to the council and asked them to take further steps.”

With that part of the challenge dismissed by consent, the barrister then asked for the case against the council to be “parked” for a period.