‘Passengers were screaming and we could hear glass smashing’ 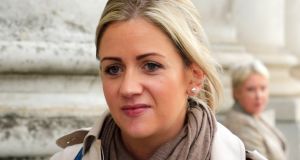 A flight attendant has told the High Court she thought “we were all dead” when an Aer Lingus plane from Malaga allegedly bounced three times as it landed at Dublin Airport.

Cabin crew member, Cassandra Reddin said passengers were screaming, duty free products in overhead baggage smashed and alcohol poured down on passengers during the incident in 2009.

Ms Reddin, who was travelling on the Airbus 320 from Malaga to Dublin, claims she suffered back and neck injuries when, she alleges, the plane landed in a heavy, dramatic fashion with an alleged excessive rate of descent.

Opening the case, Finbar Fox SC, for Ms Reddin, said the downward force generated during the landing was consistent with a wholly inappropriate and excessive rate of descent.

“Safety documents shot out of their pockets; duty free broke in the overhead baggage and alcohol leaked into the cabin.  There was a degree of chaos and stress on board,” he said.

His side contended, with one second before touchdown, the rate of descent was three to four times what it should have been.

She alleges failure to adequately supervise the landing of the plane by a co-pilot. She also claims she suffered soft tissue neck and back injury and whiplash and had nightmares afterwards where she woke up screaming.

Aer Lingus denies all the claims.

In her evidence, Ms Reddin said the cabin crew were instructed to secure the cabin for landing at 30 minutes before landing instead of 10 minutes.

She said she told everybody to sit down but her voice was shaking and a passenger told her she was not very reassuring. She said she thought the plane was not going to stop and would be off the runway.

“I thought we were all dead, that the aeroplane was not going to stop. I was shaking.”

Ms Reddin said, after they landed, the senior cabin person instructed her “not to mention what happened on the bus back to the terminal because the co -pilot was mortified”.

She said she cried the whole evening at home afterwards and was in shock. The next day, she could not move her neck and also later suffered panic attacks. She now works in the social media section of Aer Lingus, she said.