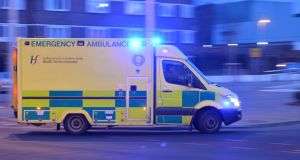 File photo: PJ Cahill was driving an ambulance which was transporting a patient from Cavan to Dublin when his friend Simon Sexton fell out the ambulance. Photograph: Alan Betson / The Irish Times

A paramedic who sued for nervous shock after witnessing the death of his colleague who fell out of an ambulance has settled his High Court action.

PJ Cahill was driving an ambulance which was transporting a patient from Cavan to Dublin when his friend, father of six Simon Sexton, fell out the ambulance side door.

Mr Cahill (50) from Kilnagarbet, Stradone, Co Cavan had sued his employers the HSE and the German manufacturer of the ambulance Wietmarscher Ambulanz Und Sonderf Ahrzeug GMBH for nervous shock after the accident in June 2010.

He claimed an ambulance was supplied which permitted the side door to open against the direction of travel and there was an alleged failure to ensure a motion lock was fitted to the door to ensure it could not be opened while the ambulance was in motion.

The claims were denied by both defendants.

On the third day of the case on Thursday, Miriam Reilly SC told the court the case had been resolved and could be struck out against both defendants.

Mr Justice Raymond Fullam said it was a difficult case for everybody and the resolution of the case was in the best interests of all parties.

During the two days in the High Court, Mr Cahill said he suffers survivor’s guilt after the accident on June 3rd 2010.

“The survivor’s guilt was hitting me all the time. I felt it was never ending thing. I was on a merry go around I could not get off,” he said.

“All I know is it should never have happened. You are working for a caring professional service and end up falling out of an ambulance dying on the side of the road.”

He said he was driving the ambulance on the N3 Cavan to Dublin Road on June 3rd, 2010 and was about seven miles (11 km) outside Cavan town when he heard a thud. He looked in a mirror to see Mr Sexton hit the ground.

He said he began resuscitation and continued his attempts in a second ambulance which had been dispatched to the scene, but Mr Sexton was pronounced dead some time after his arrival at Cavan General Hospital.

Three years ago the HSE was fined €500,000 for health and safety breaches as a result of the paramedic’s death.

In a statement after the settlement and issued through Hayden Dolan and Co Solicitors, Mr Cahill said he was pleased the litigation had come to an end and it had been a very stressful time for him and his family.

“In particular, PJ’s thoughts are with Catherine Sexton, the widow of his life long friend and colleague Simon and their six wonderful children,” the statement said.