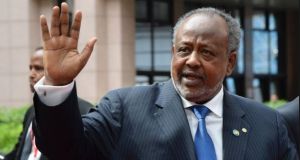 President Ismael Omar Guelleh (68) has been president of Djibouti since 1999 when he took over from his uncle, the state’s first leader after it obtained independence in the 1970s. File photograph: BBC

The President of the African state of Djibouti, Ismael Omar Guelleh, has brought High Court proceedings against Facebook Ireland over what he claims are offensive posts about him on the social media site.

The matter was briefly mentioned before Mr Justice Paul Gilligan at the High Court on Tuesday, who was told, on consent of both parties, the matter could be adjourned for a week.

In his action, President Guelleh seeks several orders including one restraining Facebook Ireland Ltd from publishing or continuing to publish the content of certain Facebook accounts, and that the accounts be suspended pending the full hearing of the action.

He also wants Facebook to close the accounts and remove the alleged offending material.

The president of Djibouti, located on the east coast of Africa, also wants orders directing Facebook to disclose to him the identities, names, email accounts, telephone numbers, postal address and IP addresses of those associated with the social accounts complained of.

President Guelleh (68) has been president of Djibouti since 1999 when he took over from his uncle, the state’s first leader after it obtained independence in the 1970s. Also known by his initials IOG, he has been re-elected on two occasions since coming to power.

Facebook Ireland Ltd is the social media site’s designated data processor for all accounts outside the US and Canada.

1 Coronavirus: House parties a ‘disaster’ for containment efforts
2 Gardaí disperse crowds gathered at coastal beauty spots
3 George Floyd death: Man shot and killed by law enforcement in Kentucky
4 How lockdown has helped us to save money - and find new ways to spend it
5 Six counties free of new cases of Covid-19 over past week
Real news has value SUBSCRIBE