Roscommon solicitor and his wife stand to lose all their property, including family home 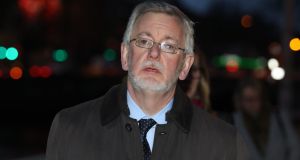 Declan O Callaghan, of Ballaghaderreen, Co Roscommon, leaving the Four Courts. A court heard on Wednesday that Mr O’Callaghan’s professional fate would be decided by two cases against him yet to be heard by a tribunal. Photograph: Collins

When Roscommon solicitor Declan O’Callaghan became obliged to reimburse two clients whose money he had taken without their authorisation, he adopted a simple but very effective strategy: he just took more money from dead people, a court was told yesterday.

Sitting in Court 4 of the Four Courts in Dublin, the now suspended lawyer remained expressionless if somewhat glum as Law Society barrister Neasa Bird went through a litany of estates of deceased clients from which Mr O’Callaghan made unauthorised withdrawals.

By the time she was finished, so was what was left of Mr O’Callaghan’s reputation. He and his wife, Mary Devine O’Callaghan, also stand to lose all their property, including their family home.

Ms Bird told of the estate of Catherine Duignan, a woman who decreed that all her worldly goods should be left to the Alzheimer’s Society. But that’s not what happened.

Dealing with Ms Duignan’s legacy, Mr O’Callaghan paid himself €34,185 in fees, and later told the charity it was the beneficiary of a bequest of just €35,000. He said nothing about the money he had deducted and only reimbursed the charity with €24,600 when forced to do so by the Law Society.

Another estate of a man being administered by the solicitor involved €41,000 which Mr O’Callaghan was supposed to hold for the benefit of the man’s four children. However, by the time they reached adulthood, all the money was gone – taken by Mr O’Callaghan without anyone’s permission.

Mr O’Callaghan took €96,000 in “multiple transfers” from the estate of a John Feeney, said Ms Bird, with the Law Society estimating that an authorised fee of €22,000 would have been appropriate.

There was the estate of Michael Creighton, valued at €484,000 and from which Mr O’Callaghan deducted, without authorisation, €74,000, “way in excess”, said Ms Bird, “of the 3 per cent fixed charge” that ought to have been applied.

Mary Philomena Crawley died intestate and her estate was to be divided between three first cousins. An agreement was signed for Mr O’Callaghan by one of them, “apparently authorising the deduction of €60,000 but that beneficiary wouldn’t have had the authority to do that”, said Ms Bird. She said €24,000 would have been the appropriate fee.

The monies were taken without authorisation, said Ms Bird, and in many instances examinations by Brendan Steen – the Law Society solicitor parachuted into Kilrane O’Callaghan – and his colleagues, senior investigator Seamus McGrath and forensic accountant Jim O’Dowd, found that some of the money was used to reimburse two other clients.

These were the estate of John Paul Gallagher, whose baby son was supposed to be the sole beneficiary of his €454,000 legacy but from which Mr O’Callaghan took €344,000 without permission, and Tracey Connolly who had €101,000 removed without authorisation from the estate of her late husband, Craig.

There appeared to have been a practice by Mr O’Callaghan of taking money and then trying to agree costs with estates after the fact.

“That clearly is not the way solicitors are to be paid,” said Ms Bird. “Unless and until they are authorised [client money held is] not the solicitor’s money.”

It was a devastating catalogue and while Mr O’Callaghan continues to deny any dishonesty, a response that is rejected by the Law Society, after lunch the court was told he would consent to the Law Society request for High Court orders to freeze his and his wife, office manager Mary Devine O’Callaghan’s, bank accounts and those of the law firm, effectively closing it.

The couple were granted “living expenses” of €11,600 a month, from which all mortgages and utility bills must be paid.

Mr O’Callaghan’s barrister, Gabriel Gavigan SC, said he remained determined to make good any deficit so that no clients were out of pocket, and there would be no call on the Law Society’s compensation fund.

To that end, a townhouse in Quinta do Lago in the Algarve was being sold, as was the family home, Ardeeven on the Sligo Road in Ballaghaderreen, and an apartment in Dublin.

Townhouses in the Portuguese golf resort are currently on the market for between €300,000 and €820,000. All money accruing from sales is to be paid to the Law Society.

The court heard Mr O’Callaghan’s ultimate professional fate will be decided by two cases against him yet to be heard by the Solicitors Disciplinary Tribunal, one filed in March, the other in September.

“If necessary,” said Ms Bird, “there will be a further referral to the tribunal . . . I would anticipate that in due course, all matters will be progressed together.”

1 Covid-19: Two-week quarantine period for arrivals into State could be lifted for some
2 The momentum behind calls to ease lockdown may become irresistible for politicians
3 Trump announces clampdown on social media companies
4 Miriam Lord: Taoiseach is trapped in a Zoom session from hell
5 Starmer hits home with measured attacks on Tory pandemic record
Real news has value SUBSCRIBE