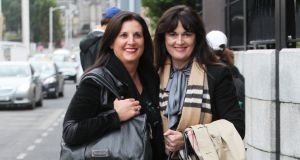 Michelle Rocca (right) with her sister, Laura at the High Court in Dublin. Photograph: Collins

The High Court case was due to enter its fifth day on Tuesday when her counsel Mark Sanfey said his client had “considered the matter over the weekend and decided she does not wish to proceed with her claim”.

Over the weekend, singer Van Morrison, who was married to Ms Morrison, issued a statement dissociating himself from the legal action and said he had never lived in Kilross House, Sorrento Road, Dalkey. He said the court action “was brought by Michelle Rocca and I have no part in it”.

“As we have been legally separated since September 2013, I would appreciate if I was not included in any further references to this ongoing action.”

Ms Morrison told the court last Friday that Van initially thought about using Kilross as a recording studio but later “we decided it would be a family home”.

She said privacy was an important consideration for Van who liked to be able to get out of his car and go to his front door without being overlooked. Views of Dalkey Island from Kilross were also important for her, she said.

It was Ms Morrison’s second action over work by neighbours Conor and Eileen Kavanagh on their “Mount Alverno” home. The previous one, brought against the local council in relation to compliance with planning permission, was settled.

Esmonde Keane SC, for the Kavanaghs, asked the court to “mark its opprobrium” over what was a vexatious and unstateable case by awarding costs beyond the normal so that his clients would recover the actual costs there had been in defending the case.

The enjoyment of their principal private residence had been “utterly tarnished” and their lives had been made “a living hell” for the last six years during which it was abundantly clear there was no basis for the claim, counsel said.

Mr Sanfey SC, for Ms Morrison, said his client fully accepted she was going to have to pay legal costs, but because she was not proceeding, the court should not infer the case was falling apart or was frivolous, vexatious and unstateable in the first place.He asked the court to award only normal costs.

Mr Justice Keane said he wanted to carefully consider the issue of costs and would give a decision later. He dismissed the case on the basis it had been withdrawn.

In a statement issued Tuesday evening, the Kavanaghs said they were pleased that the proceedings had been withdrawn entirely.

“Conor and Eileen are delighted that the protracted proceedings which have been running since the 20th of November 2009, brought without any legal foundation, have been struck out by Mr Justice Keane with a Cost Order in their favour. These proceedings have been very difficult and Conor and Eileen are delighted that this difficult time has been brought to a close and their position vindicated.”