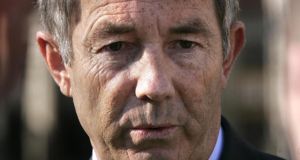 Michael Lowry deliberately misled the tribunal, which might well have withheld all of his costs, Mr Justice John Hedigan said.

Independent TD Michael Lowry engaged in “a litany of falsification and deception” - including the falsification of a solicitor’s files - in his failure to co-operate with the Moriarty Tribunal, a High Court judge said today.

Mr Justice John Hedigan made the comment when he dismissed on all grounds Mr Lowry’s challenge to a decision of that tribunal to only award him one-third of his legal costs, a bill he says will run into millions.

The tribunal had found the former Fine Gael minister concealed certain of his dealings from the tribunal as well as findings of perjury and bribery of a potential witness to support false evidence, the judge said.

As a result of this conduct, the tribunal was frustrated and misled, and its work was protracted significantly.

Mr Justice Hedigan said in light of its findings, the tribunal’s rationale for allowing him only one-third of his costs was based on the general rulings criteria of false and misleading information, and time lost as a result.

It was also based on the centrality of Mr Lowry in the areas in which he failed to co-operate and the fact that such co-operation could not be reduced to a mathematical formula.

The tribunal found the non co-operation related to various aspects of the so called “money trail” rather than in relation to what was called the “GSM module” - an area related to the awarding of the country’s first mobile phone licence by Mr Lowry when he was minister for communications.

In the light of this finding, the tribunal “might well have withheld all of Mr Lowry’s costs”, the judge said. It might even had a basis for ordering him to pay some of its costs.

It was certainly within the bounds of reasonableness to decide to withhold just two-thirds of his costs.

He found the tribunal was fair and proportionate in deciding to only award the Tipperary North TD one-third, he said.

In relation to Mr Lowry’s claim that he was discriminated against compared to the late former Taoiseach Charles Haughey, who the tribunal investigated along with Mr Lowry, Mr Justice Hedigan also rejected his arguments.

Mr Lowry had argued Mr Haughey, who was awarded all his costs, had got them on the basis of what seemed equitable with no formulation as how they could be determined. It was argued the conduct of Mr Haughey was found by the tribunal to be the same as that of Mr Lowry.

Mr Justice Hedigan said the tribunal had argued the two men’s cases were not the same. Mr Haughey did not volunteer information in relation to payments to him and “feigned ignorance” of other matters.

“He did not however deliberately mislead the tribunal whereas Mr Lowry did”, the judge said.

In his view, the approach in relation to the two men, and to that of costs to businessman Ben Dunne who gave evidence to the tribunal, constituted a reasonable rationale for its decision, he said. The tribunal was entitled to find they were not like situations.

The judge also rejected Mr Lowry’s claims the tribunal did not re-examine the evidence objectively, or give him an opportunity to make submissions or argue his case before deciding costs.

It seemed to Mr Justice Hedigan the tribunal did not base its decision “on anything other than its findings in relation to Mr Lowry’s conduct before the tribunal”. No second hearing was required in order to decide costs.

He was furnished with all the tribunal’s findings on which it intended to make the costs decision and he made submissions in relation to these and did so “quite elaborately”. There was no basis for his claim he was not afforded fair procedures.

The judge also said no party appearing before the tribunal could have been in ignorance of the consequences of non co-operation and liability for costs.

Mr Lowry “failed to demonstrate any unreasonableness or irrationality, disproportionality or discrimination” by the tribunal.