Man to be given community service 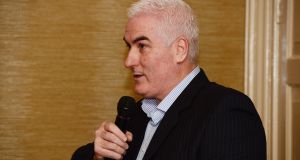 Mr Justice Brian McGovern said, because Ben Gilroy (above) admitted criminal contempt and had apologised and consented to a community service order, the court considered such an order, subject to a suitable report from a probation officer, the appropriate punishment instead of three months imprisonment. File photograph: Alan Betson

A High Court judge has imposed a community service order on a man for admitted criminal contempt of court.

The contempt related to Ben Gilroy having, in a sworn statement in proceedings by Allied Irish Banks seeking to enforce a €3.2m judgment against another man, accused the court of “criminal intimidation and threats” and comparing the action of a court to that of a thief putting a gun to his head and robbing him of his wallet.

Mr Gilroy, Riverview, Athlumney Abbey, Navan, Co Meath, alleged he was threatened by members of a “semi-secretive society” wearing wigs and black cloaks who believe they are “superior to other members of society” and who act in a clandestine fashion “to hide their criminality”.

Mr Justice Brian McGovern said, because Mr Gilroy admitted criminal contempt and had apologised and consented to a community service order, the court considered such an order, subject to a suitable report from a probation officer, the appropriate punishment instead of three months imprisonment.

Earlier, the judge noted Mr Gilroy’s June 27th affidavit accused the judge of having a “superiority complex” due to being satisfied the court had jurisdiction over him and had referred to “threats” made to him. He had also alleged “an undeniable link between banking cartels and this semi-secretive society”, suggesting some “improper connection” which would put the court in a position of bias.

Mr Gilroy also threatened the court and quoted from correspondence between Thomas Jefferson and the French cleric Abbe Arnoux in 1789 in which Mr Jefferson said it was better to have a cause decided by tossing a coin than by a judge biased against one side, the judge said.

Mr Gilroy had then accused him — Mr Justice McGovern — of being “in breach of his oath of office” and of taking part in, and allowing criminal activity to take place in front of him, the judge said. His affidavit also contained further threats against the judge and solicitor and counsel for AIB, the plaintiff in the proceedings.

It is important people have confidence in the administration of justice and attempts to deliberately undermine the authority of the courts cannot be permitted if the rule of law is to flourish, the judge said.

It was an aggravating factor Mr Gilroy set his views out in an affidavit and not “in the heat of the moment”.

However, Mr Gilroy must be given credit for having admitted criminal contempt and unreservedly apologising to the court over the affidavit and his behaviour. Were it not for that, the correct term of imprisonment would have been six months but, giving him credit for those, the appropriate term was three months.

However, the court considered a community service order was the appropriate way to deal with the matter, the judge concluded.

In the course of those proceedings, the bank alleged civil contempt and applied for attachment and committal to prison of Mr McQuaid, Mr Gilroy, and a third man, Charles McGuinness, of Tully House, Monaghan. That application stands adjourned to allow the defendants apply to cross-examine an official for the bank.

The bank also alleged Mr Gilroy was guilty of criminal contempt and that matter was decided on Tuesday.