Man sues for damages over alleged disfigurement after cancer treatment

Liam Coughlan claims an unnecessary and inappropriate procedure was carried out 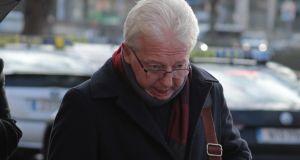 Liam Coughlan claims he suffered disfigurement when he had mouth surgery as part of cancer treatment at a Cork hospital. Photograph: Collins Courts

A man who claims he suffered disfigurement when he had mouth surgery as part of cancer treatment at a Cork hospital has sued for damages in the High Court.

Liam Coughlan always had great pride in his appearance but now feels he looks like “elephant man”, his counsel Oonah McCrann SC said. People sometimes do not recognise him, his life is now very different and he fears for the future, she said.

“He can’t reach up to change a light bulb, he can’t lift heavy saucepans in the kitchen. He worked all his life and is devastated he can’t get back to work,” counsel added. Before the surgery in 2015, Mr Coughlan was gregarious and very active. she said.

Ms McCrann instructed by Cantillon Solicitors, said their case is that an alleged unnecessary and inappropriate procedure, and an alleged inappropriate repair, was carried out. Mr Coughlan (63), a carpenter and maintenance officer from Lower Aghada, Midleton, Co Cork, has sued South Infirmary Victoria University Hospital, Cork, and the HSE over the care he received when he needed mouth surgery as part of treatment for mouth cancer in 2015.

The claims are denied and it is contended the surgery, repair and care were appropriate. Mr Coughlan, who had an ulcer at the base of his mouth was diagnosed with mouth cancer in January 2015 and advised he would have to have a sliver of the inner aspect of his lower jaw removed.

It is claimed more extensive surgery than he was allegedly informed about or allegedly consented to was undertaken and that he was not informed a plate and screws were to be inserted. In February 2015, Mr Coughlan underwent a tracheostomy, a bilateral neck dissection and removal of a part of the jaw bone. He was discharged from the hospital after several weeks. It is claimed that his neck incision wound did not heal well and he also had to have radiotherapy.

He continued to suffer problems and, it is claimed, was informed in August 2015 a plate and screws had been inserted as part of his original surgery. He had to have a further repair procedure in the jaw area in November 2015 and was discharged from hospital in mid-December 2015. He sought a second opinion and was admitted to a Dublin hospital in September 2016 for further operative intervention. It is claimed there was failure to treat Mr Coughlan properly and that he was caused to develop an infection. It is further claimed he had to undergo numerous repair surgeries.

Mr Coughlan, it is claimed, has severe restriction of shoulder movement and head and neck movements and is unable to hold his head in its natural position. In evidence, Mr Coughlan said, before the surgery, he was the type of person who was outgoing and popular. “I knew how to dress up properly. I liked my style.” When he saw himself in the mirror for the first time after the surgery, he said: “I thought I was deformed, my head was stitched too close to my shoulders. It was like somebody got their measurements wrong.”

The case continues next week before Ms Justice Deirdre Murphy.

1 Ireland has strategy to ‘break the chains’ of coronavirus - WHO’s Mike Ryan
2 ‘Everyone still thinks it’s a joke’ - parents of toddler with coronavirus speak out
3 Miriam Lord: You cannot cocoon democracy – or can you?
4 Coronavirus: Intensive care units ‘may be overrun’
5 Coronavirus: Almost 100 staff and residents in one nursing home test positive, Dáil hears
Real news has value SUBSCRIBE