Man entitled to €263,000 following suicide of wife after hospital discharge 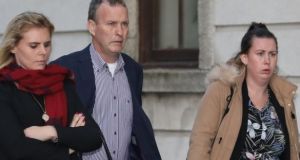 A man who sued the HSE after his wife took her own life a day after she was discharged from hospital is entitled to €263,000 damages, a High Court judge has ruled.

Josephine Cloonan had been admitted to University Hospital Galway (UHG) after taking an overdose of pills and was discharged a day later.

Angelo Cloonan sued the HSE and Dr Kishan Browne alleging negligence on grounds including their alleged failure to properly assess the imminent risk of suicide to his wife Josephine, known as Josie, to whom he was married for 25 years.

In his judgment, Mr Justice Michael Hanna said Mrs Cloonan was “not afforded an appropriate standard of care” after she was admitted to the emergency department at UHG on April 17th 2011.

He considered, had she been admitted as an in-patient instead of being discharged from the hospital, it was “probable she would not have taken her own life in the early hours of the morning of April 19th”.

Mrs Cloonan, who worked for An Post, was admitted after taking an overdose of prescribed medicine. She was seen by Dr Browne, a psychiatrist then employed as a registrar at UHG and was discharged to her home at Ballinfoyle Park, Headford Road, Galway, around midday on April 18th.

Her body was discovered there the following day.

The court heard, in the 18 months before her death, Mrs Cloonan suffered depression and anxiety and underwent counselling arising out of a Garda investigation into allegations she and another person were sexually abused during their childhood. The couple’s marriage suffered and she made an unsuccessful attempt at suicide prior to her overdose on April 17th.

In his action, Mr Cloonan argued the defendants failed to treat her properly and she should have been kept in the hospital and not released home following her overdose. Mr Cloonan, represented by Conor Maguire SC sought damages for mental distress. The claims were denied.

The defendants pleaded they acted in a manner compliant with general and approved psychiatric practice that would have been adopted by other practitioners of similar specialisation and skill.

The defendants, who expressed their sympathy to the Cloonan family, said the required appropriate treatment, diagnosis, and risk assessment of Mrs Cloonan was carried out. They further claimed, after she was admitted, she was offered in-patient care but had refused and a treatment plan was agreed with her and her husband.

In his judgment, Mr Justice Hanna said Dr Browne placed an unwarranted reliance on his interview with Mrs Cloonan when she was admitted to the hospital in which she had told the doctor she did not want to be admitted as an in-patient.

Dr Browne had taken an “over optimistic” view of the risk of her further self-harming, he said. That, the judge said, was due to the doctor’s failure to make certain inquiries, such as contacting Mrs Cloonan’s GP or the consultant psychiatrist on call on the relevant date.

“A medical practitioner appropriately informed, as a matter of probability, would have persuaded Mrs Cloonan to remain as an in-patient in the hospital,” he said. Such a step would have been supported by Mrs Cloonan’s family and her GP, he added.

Mrs Cloonan would have been “admitted to a regime that would have provided supervision, monitoring and the appropriate treatment during this crucially early period.”

Referring to evidence from Professor Patricia Casey, who was an expert witness for the plaintiff, he said: “While suicide can be predictable, it is not inevitable. ”

One is entitled to take the view, with the appropriate medical care and undoubted love and care of her family, Mrs Cloonan, who had attempted suicide on two earlier occasions, would have learned to accommodate the difficulties she experienced, he said.

There was no evidence to suggest she would have been impervious to treatment and it was appropriate to take an optimistic view of what her future well being would have been, he said. On foot of those and other findings, he said the defendants had been negligent and Mr Cloonan was entitled to damages of €263,000. The matter will return before the court in October for final orders.