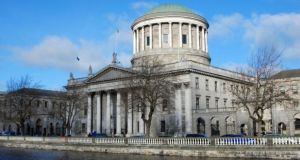 The High Court has granted KBC Bank permission to bring proceedings that could result in three siblings being jailed over their alleged failure to comply with an order to vacate a Co Roscommon farm.

The High Court has granted KBC Bank permission to bring proceedings that could result in three siblings being jailed over their alleged failure to comply with an order to vacate a Co Roscommon farm that was the centre of a controversial eviction.

Ms Justice Leonie Reynolds granted the bank permission on Monday and made directions in a motion seeking the attachment and committal to prison of siblings Michael Anthony, David and Geraldine McGann.

In its proceedings KBC, represented by Rossa Fanning SC, claims that the McCanns have not complied with a court order directing them to vacate their family home at Falsk, near Strokestown.

The bank last October secured an injunction giving the family until noon on November 12th to leave and cease trespassing on the property.

Mr Fanning told the court that this was “a sensitive case” and the bank had done everything it could to avoid making this application “in the hope that sense would prevail”.

However, he said the defendants remain in breach of the order and his side was seeking various directions in regards to the service of the motion for attachment and committal on the McGanns.

Ms Justice Reynolds made various orders in regards to the service of the documents including that any personal service of the McGanns should be carried out with members of An Garda Síochána present. That motion will return before the court next month.

The property was the subject of a loan agreement between KBC and the farm’s registered owner, Michael Anthony McGann. He fell into arrears on repayments and owed the bank some €431,000. KBC obtained a possession order in respect of the property in 2012, which was not appealed.

The last repayment on the loan to KBC was made by the borrower in February 2014, it was claimed.

In a separate, but related, application the judge also allowed solicitors that had previously represented David and Geraldine McGann during the injunction proceedings to come off record and cease being their legal representatives.

Michael Anthony McGann was not legally represented nor present during the injunction proceedings.

The motion to come off record was brought because the solicitors, Carter Anhold & Co, have been unable to obtain instructions from the two McGanns.

The McGanns were not present in court on Monday, however the court noted correspondence which said they were objecting to the solicitors coming off record.

The judge accepted that the relationship between David and Geraldine McGann and their lawyers had “broken down,” and allowed the firm come off record. However, she directed that they write to their former clients informing them of the court’s decision and that the seriousness of the situation be explained to them.

KBC last year secured an injunction requiring the McGanns to vacate their home after Mr Justice Senan Allen ruled they had no entitlement to be on the property. He also held that the bank had obtained and executed a valid possession order over the property, and that the McGanns are trespassers there.

The bank sought the injunction after it obtained an order allowing it to execute the possession order over the property. The McGanns had opposed the application.

The case centers around events in December 2018 when the McGann family were evicted from the farm on foot of a repossession order KBC obtained in respect of the property several years ago.

Gardaí subsequently launched an investigation after the security personnel were attacked, several of whom required medical treatment, several vehicles were burnt and a dog had to be put down due to injuries it sustained.