Judge queries if woman had adequate notice of wardship application 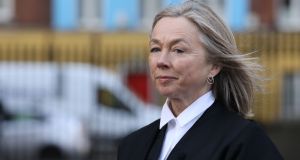 Ms Justice Niamh Hyland questioned whether the woman had been given an adequate opportunity, as envisaged under the European Convention on Human Rights, to express her views. File Photograph: Collins Courts

A High Court judge has adjourned a petition aimed at making an intellectually disabled woman a ward of court after expressing concerns about the application.

Ms Justice Niamh Hyland questioned whether the woman had been given an adequate opportunity, as envisaged under the European Convention on Human Rights, to express her views on the application.

The judge said that seeking to have a person made a ward of court is a “very serious” application as taking an individual into wardship affects their liberty in all sorts of ways.

She told a solicitor moving the petition on Tuesday on behalf of a family member that the court required more information in connection with the application.

She also observed that a report from a court-appointed medical visitor expressing the view the woman met the criteria for wardship in that she lacked capacity to make decisions about her person and finances was “very slim”, running to two pages.

She also noted no application had been brought to have a guardian ad litem appointed by the court to represent the woman’s interests in the proceedings and that the wardship petition had been explained to the woman by a summons server who did not know her.

The judge said that, given that no guardian had been appointed, the court needs more information concerning the notice given to the woman of the application and how her rights were protected.

She accepted there are capacity issues in relation to the woman and that she is getting “excellent” care from a family member, the judge added. She could see the reasons for seeking wardship but needed more information.

The judge adjourned two other wardship petitions due to similar concerns whether the subjects of those had been given adequate notice of the petitions.